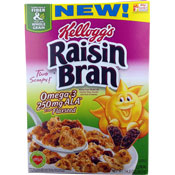 
The complete name of this cereal is Kellogg's Raisin Bran Omega-3 250mg ALA from Flaxseed. That's one of the most descriptive cereal names in the history of cereal. The front of the box described the product as "delicious raisins blended with crisp bran flakes, flaxseeds and a touch of sweetness."

The back of the box describes it like this:

The first 5 ingredients listed on the side panel are whole grain wheat, rice, sugar, raisins and wheat bran. 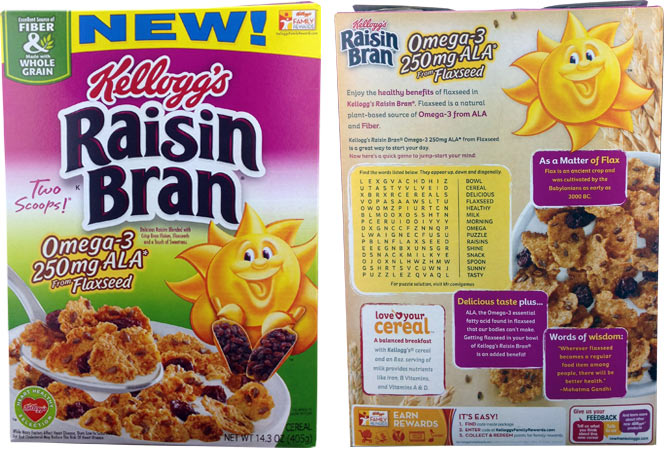 I found this cereal to be quite different from traditional Kellogg's Raisin Bran. The flakes are coated with flax seeds (not quite to the extent shown on the box but they are noticeable). They're are heartier and crunchier than the usual flakes. Despite the added good stuff, this cereal is a little boring compared to the old standby. The flavor nuances get lost in the mix. That said, I did enjoy the cereal but I prefer the taste of the origin. I give this cereal 5 out 7 golden eggs.

Company Description: Kellogg's was originally founded as the Battle Creek Toasted Corn Flake Company in 1906. The company's founder Will Keith Kellogg is credited with inventing corn flakes along with his brother John Harvey Kellogg. The company was renamed the Kellogg Company in 1922... Read on and see all cereals from Kellogg's
This cereal belongs to the following Mr Breakfast Cereal Families:
Upload an image for this cereal
Comments About This Cereal
What do you think of Raisin Bran Omega-3?

I had it in Florida, not carried here in NJ. I agree... hope it catches on so they don't discontinue.

I like it better than regular Raisin Bran. It seems to have more crunch and the flavor is almost the same. Also, I think it helps my digestion. Like someone else said, it can be hard to find. I hope it catches on and won't be discontinued.

This is my favorite cereal. Do yourself a favor and give it a try. It's often hard to find however and I'd hate to see it discontinued.

I put ground flaxseed on my cereal every morning. According to anything I have read, flaxseed needs to be at least partially ground for the body to be able to fully use the wonderful omega-3 that is in flaxseed. I am surprised they did not do this.