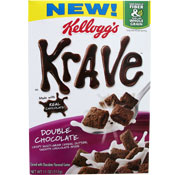 
Kellogg's Krave cereals were introduced in the U.K. in 2010 where the following varieties have been made: Chocolate, Double Chocolate, Totally Chocolate, Milk Chocolate, Chocolate Caramel and Chocolate Hazelnut.

In January of 2012, Kellogg's introduced Krave cereals to the U.S. starting with variety and (single) Chocolate Krave.

The front of the cereal box calls this product "cereal with (a) chocolate flavored center... crispy multi-grain cereal outside, smooth chocolate inside."

The side panel of the box had this description when the cereal made its U.S. debut:

"A delicious combination! Every serving of Kellogg's Krave is made with 8 grams of whole grains and is a good source of fiber. Plus, inside each bite is a smooth filling made with real chocolate."

This cereal differs from (single) Chocolate Krave in that the cereal pieces are deep brown in color compared to the other cereal's tan pieces. Due to it's chocolate flavored exterior, this variety does have a more distinct chocolate flavor. 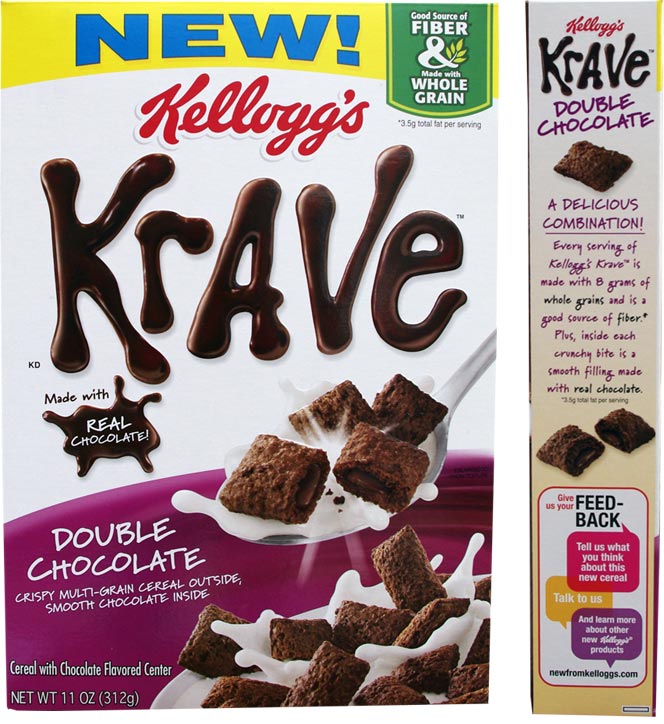 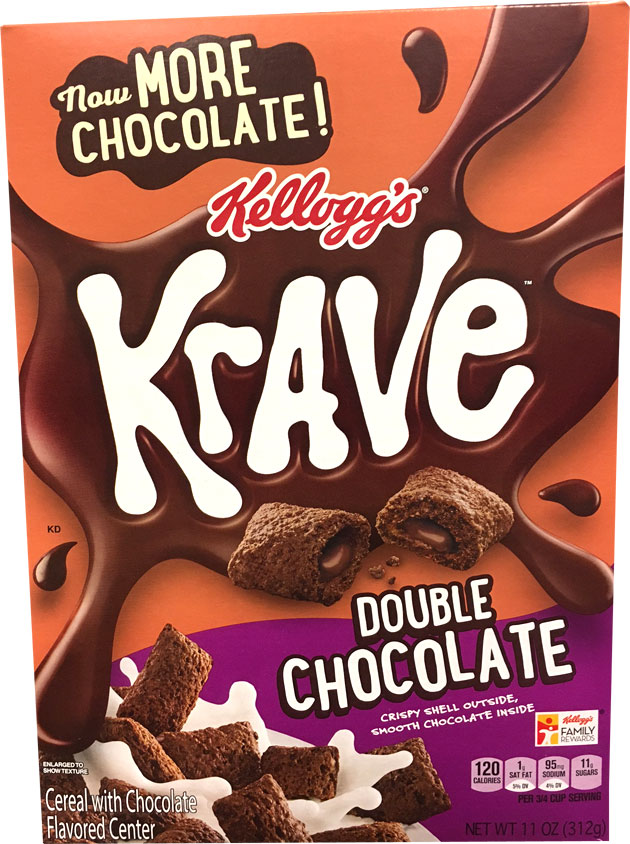 Above is how the box of Double Chocolate Krave appeared in 2017.


Company Description: Kellogg's was originally founded as the Battle Creek Toasted Corn Flake Company in 1906. The company's founder Will Keith Kellogg is credited with inventing corn flakes along with his brother John Harvey Kellogg. The company was renamed the Kellogg Company in 1922... Read on and see all cereals from Kellogg's

Krave - Double Chocolate Cereal has been reviewed on MrBreakfast.com.

Click here to read the review.
This cereal belongs to the following Mr Breakfast Cereal Families:
Upload an image for this cereal
Comments About This Cereal
What do you think of Krave - Double Chocolate?

This is my jam right here. Like real good.

I think the Double Chocolate version tastes better than the other version. If you like chocolate, then you'll love this cereal. The filling is smooth in texture and these go down easy.

The best cereal ever!

Excellent rich chocolate flavor, almost like semi-sweet chocolate! Texture is a bit too fibrous, however, and tends to lodge in the molars.

I like it because it's the closest thing I've found to Mr Wonderful's Surprise cereal from the 70's - which I LOVED!