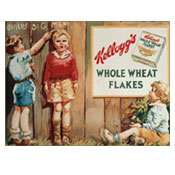 
We don't have much information about this cereal. We do know that in 1934 at Sather's Fairway Fine Foods in Worthington, Minnesota, two packages of Kellogg's Whole Wheat Flakes could be purchased for 25 cents.

Interestingly, we also found the same cereal advertised that same year at Allen's Nu-Way Market in in Prescott, Arizona... 3 packages for 25 cents. From that, we've surmised that it was better to shop for cereal in Prescott, AZ than Worthington, MN in 1934.

A vintage ad for Whole Wheat Flakes, dated around the mid-1930's, tells us that the cereal "builds big men."

Upload an image for this cereal
Comments About This Cereal
What do you think of Whole Wheat Flakes?
There are no comments yet for this cereal. Be the first! Was it good? Was it bad?
Do you have information not included in the article? Let the world know!