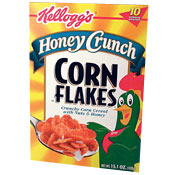 The front of the box described it as a "crunchy honey sweetened corn cereal & nuts."

A September 19, 1996 press release announcing Honey Crunch Corn Flakes described it like this:

"The new cereal starts with the simple goodness of an American classic -- Kellogg's Corn Flakes -- and bakes in the taste and texture of honey and bits of almond. To support the launch of its new product, Kellogg's will implement a comprehensive marketing campaign that includes advertising, promotion and public relations support. The national television ad campaign, which consists of both :15 and :30 second spots, will include the tagline "Taste of Honey, Heart of Gold."

"Introducing the best thing to happen to breakfast in a generation, new Honey Nut Corn Flakes. Sweet honey and nuts baked to an incredible crunch and, under it all, the sweet goodness of Kellogg's Corn Flakes."

Upload an image for this cereal
Comments About This Cereal
What do you think of Honey Crunch Corn Flakes?

This was absolutely my favorite cereal of all time! In college I used to stack up on it and it was my go to for breakfast, a quick lunch or a late night snack. I don't understand why it was discontinued as it was so good. I pray that Kellogg's bring it back.

This was my entire family's favorite cereal! Please bring it back.

This cereal was great. None compares.

Please bring this cereal back! I remember eating this as a little boy in the 90's and it was the best!

Please bring it back. There is NO substitute!

I really loved this cereal. I have looked at every store I can think of and have gone online several times to see if I could order it. It reminds me of the Kellogg's Corn Flakes I grew up with but just stepped up a notch. Please bring these back or at least make it so we can order them.

Used to eat this by the box in 1999. Late night snack and early morning. PLEASE BRING IT BACK!

I miss this cereal so much. It is hands down my favorite all time cereal. I don't get why they would discontinue it... well obviously it wasn't profiting the company, so I guess the question is how were people not buying this awesome cereal... best ever. I would buy it online and have it shipped from anywhere.

This was my favorite cereal and I just happened upon this thread when I was looking to see if I could locate anywhere.