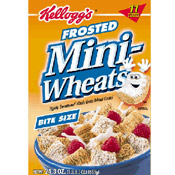 
This cereal has been described on the box as a "lightly sweetened whole grain wheat cereal." It's sometimes identified as "original" on the front of the box to distinguish it from the many flavored (or in one case, unflavored) versions that later emerged.

This is a bite-size version of Kellogg's Frosted Mini-Wheats which were introduced in 1978.

When the bite size version hit the scene, a TV commercial introduced it like this:

Upload an image for this cereal
Comments About This Cereal
What do you think of Frosted Mini-Wheats: Bite Size?

We need this cereal back in Russellville, Arkansas. We used to have it but we don't anymore. It was my favorite cereal.

Who wants High Fructose Corn Syrup with their breakfast!?! I sure don't...