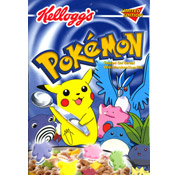 From: Kellogg's
Introduced in 2000

Kellogg to Launch First Pokemon Cereal This Spring; Kellogg Lets Kids Have Their Pokemon and Eat It, Too

Kellogg's brings Poke-mania to supermarket shelves this spring with the introduction of a limited-edition cereal, based on Nintendo's popular Pokemon franchise.

With a bright blue package that prominently features the Pokemon characters and embossed foil lettering, Kellogg's Pokemon Toasted Oat Cereal With Marshmallow Bits will jump off the store shelves and make a bold statement with kids and moms.

"Kellogg's Pokemon cereal is the latest example of our commitment to bring fun back to the cereal aisle and offers kids a unique way to catch Pokemon fever," said Paul Norman, vice president of marketing for ready-to-eat cereal, Kellogg USA.

The Pokemon phenomenon kicked off in the United States in September 1998 and is currently a seven billion-dollar business worldwide, with the number-one rated kids' show and video games. Poke-mania continues in 2000 with the introduction of dozens of new Pokemon characters, the new Gold and Silver Game Boy games, and a summer 2000 sequel to Warner Bros.' Pokemon: The First Movie.

Marketing support for the cereal launch includes a print and television advertising campaign, developed by Leo Burnett of Chicago, that will break in June, and eye-catching point-of-sale materials. 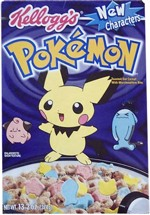 Submitter: DeeJay
Uploaded: 3/26/2010
Additional details
Upload an image for this cereal
Comments About This Cereal
What do you think of Pokemon?

View all 56 comments for this cereal.

This needs to come back man!

I need this now!

I remember my dad buying us two trolleys (shopping carts) worth! Please, for the sake of future generations, put it back on the shelves. In all countries!

Bring it back the the USA!

Bring it back! Dear God or whoever... just bring the cereal back.. Enough people would buy it to make it profitable! Bring it back for the happiness of the people and your staff's wallets! Please I need this cereal in my life.

I will buy so much! Please bring it back!

Please bring it back! It was, is, and always will be... just the greatest cereal! Please! :'(

I would literally kill a man for this cereal. God knows what I would do if I could make Pokemon real. Probably eat every person alive if that meant Pokemon coming to life.

View all 56 comments for this cereal.