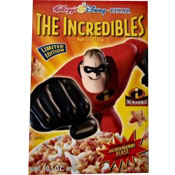 A press release from Kellogg's described the cereal:

"The Incredibles" limited edition cereal is a multi-grain cereal featuring "Incrediberry Blast" strawberry-flavored toasted corn, wheat and oats. The cereal is low in fat and provides 11 essential vitamins and minerals.

The cereal pieces were shaped like stars which were colored yellow and orange. The colors were most likely intended to bring the super hero costumes from the movie to mind. They looked vaguely like misshapen candy corn.

"The Incredibles" movie featured the voices of Craig T. Nelson, Holly Hunter, Samuel L. Jackson and John Ratzenberger. The story involved an aging, disheartened super hero who returns to top form when his super family is threatened by a villain from his past.

Submitter: leprican_katie
Uploaded: 7/8/2008
Additional details
Upload an image for this cereal
Comments About This Cereal
What do you think of Incredibles?

I remember this cereal. I think I was 12 at the time - either way I really liked the taste of it.

This is the best cereal I've ever had. I had one box, and liked it so much I immediately bought three more and finished them all the same week. Then I never saw it again. If I was smart I'd have bought every box on the shelf. Perfectly sweet and satisfyingly crunchy.

I loved the cereal so much. It was only around for a very, very short time.

Great movie! I never got to try the cereal. It must have never come to my area because I would have bought several boxes. Oh well.