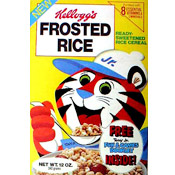 From: Kellogg's
Introduced in 1977

According to the book What Were They Thinking? by Bruce Felton:

"When Kellogg's Frosted Rice was first introduced in 1977, it contained so much iron that consumers found they could pick it up and eat it with a magnet. After the problem was fixed, a company spokesman assured the Wall Street Journal that the new, improved - and demagnetized - version of the cereal could not be lifted with magnets 'unless they are very, very strong.'"

The mascot for Frosted Rice was Tony Jr., son of Tony the Tiger. Before he appeared for Frosted Rice, he often helped his dad promote Sugar Frosted Flakes in television and print ads. 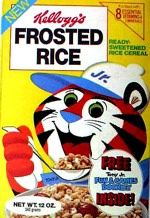 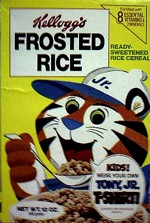 Submitter: jeffrey
Uploaded: 8/14/2010
Additional details
Upload an image for this cereal
Comments About This Cereal
What do you think of Frosted Rice?

When they changed this to Frosted Krispies, the taste changed too. It was much, much sweeter and not nearly as good. The Frosted part became literal as they were totally covered in white, whereas Frosted Rice just looked like glazed Rice Crispies and were not as sweet. Frosted Krispies just taste like sugar. Frosted Rice were basically sweet Rice Crispies with a hint of Frosted Flakes. I miss them.

I remember this one. I liked it.

It is still around. Now it is called Frosted Rice Krispies. I see it at Wal Mart and Publix.

I liked this cereal when it was out and wondered why it didn't last longer.

Great Cereal, not too sweet.