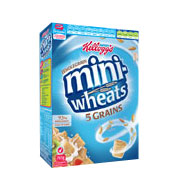 
The five grains in 5 Grain Mini-Wheates are wheats, oats, barley, triticale and rye. This cereal is available in Australia and other select non-U.S. markets. The first press accounts we've found for this cereal are from 2008, although it may have been introduced before then. The cereal was still listed as an active product on Kellogg's Australian website in 2011.

Upload an image for this cereal
Comments About This Cereal
What do you think of Mini-Wheats: 5 Grains?
There are no comments yet for this cereal. Be the first! Was it good? Was it bad?
Do you have information not included in the article? Let the world know!