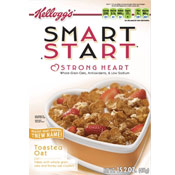 
This cereal is described on the box as "lightly sweetened flakes with whole-grain oats and honey oat clusters." It is alternately known as Toasted Oat Smart Start Strong Heart. According to the box, it is a "good source of fiber (with) whole-grain oats, antioxidant vitamins A, C & E, and (it's) low-sodium."

The first three ingredients listed on the side panel are oat bran, sugar and oat clusters.

As of 2011, this was one of two Smart Start cereals that was still available (or at least, still listed on Kellogg's website). The other was Smart Start Original Antioxidants Cereal.

Upload an image for this cereal
Comments About This Cereal
What do you think of Smart Start: Toasted Oat?
By gingin