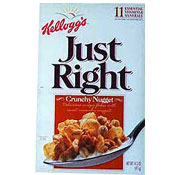 From: Kellogg's
Introduced in 1985


This product was described on the box as a "whole wheat, corn, rice & oat cereal." Television ads pitted Just Right cereal against General Mills' Total cereal with suggestions that Just Right was the more enticing cereal because it contained more than just flakes. In its early years, it was available in two varieties: Just Right With Fruit and Just Right All-Grain.

The following description is from a 1986 television commercial:

"It's a question of taste. If you had your pick of two cereals, both with 100% nutrition, would you pick the one with just one kind of flake? Or Kellogg's Just Right with three different kinds of flakes, plus hearty rolled oats, plump raisins, sweet juicy dates and crisp crunchy nuts? You're not alone. Three out of four people pick Just Right over every other high-vitamin cereal. It was no question of nutrition. It was simply a question of taste. Kellogg's Just Right... With Fruit or All-Grain."

Submitter: Mr Breakfast
Uploaded: 5/18/2009
Additional details
Upload an image for this cereal
Comments About This Cereal
What do you think of Just Right?

Please bring it back to the US! It's the best! Just right in every way!

My children's and my favorite cereal, they never wanted sugary stuff with this one. Why did Kellogg's get rid of it? You can buy it in England and Canada, why did they take it from us?

Please bring it back to the US. I miss my date nuggets!

Kellogg's, if you're reading this, please bring back this cereal! Or let us order it online at least!

If anyone from Kellogg's is reading this... Guys, bring this cereal back. Don't be corporate morons. Listen to the people.

Kellogg's "Just Right" was another of my favorite cereals that is now gone.

I have been looking for this cereal for quite a while. I loved it before it was taken off the US shelves.

It's the only cereal in the whole world that my son will eat.

Well, here it is, many years later and I am still looking for Just Right Cereal. Never knew why it was removed or not re-ordered. Can someone please enlighten me? I love Kellogg's Raisin Bran but really, really want Just Right back!

Where can I find this great cereal? It was the best. I miss it.