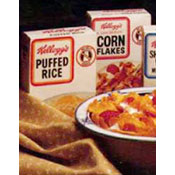 
We have never seen a full size box of this cereal, only small single-serving boxes, which has us believing that this cereal may have been produced exclusively for the hospitality industry, or it may have appeared in multiple cereal variety packs. The same is true of Kellogg's Puffed Wheat Cereal.

You might be saying, "Mr. Breakfast, you're crazy. I see Puffed Rice cereal every time I go to the store." To that, I would suggest that you're thinking of Quaker Puffed Rice Cereal. They're the ones who brought puffed rice to the world and the main ones who still do.

Upload an image for this cereal
Comments About This Cereal
What do you think of Puffed Rice (Kellogg's)?
By Tiger1957

I never knew Kellogg's had a puffed rice cereal. I always went with Super Sugar Crisp - now know as Golden Crisp - with Sugar Bear on the box by General Mills. Wish it was in the stores, but it is at their new restaurant in NY.

I am pleading.... Please bring it back!

Where can I buy Kellogg's Puff rice cereal? I cannot find it anywhere.