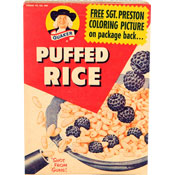 From: Quaker
Introduced in 1909


Sales of Quaker Puffed Rice Cereal were fairly lackluster from the time they were created until 1913.

In 1913, an advertising man named Claude C. Hopkins was assigned to help create an ad campaign for the cereal. Hopkins toured the Quaker factories looking for ideas. When he realized that puffed rice was actually made by using puffing guns (flash pressurizing and heating the grain until it expands or explodes), he let the cereal's manufacturing process speak for itself.

Quaker Puffed Rice's new slogan, "The grains that are shot from guns", was a huge success. Sales of the cereal "shot" through the roof.


- - - - - - - -
In 1955, Quaker Puffed Rice and Quaker Puffed Wheat cereals offered one of the most popular cereal premiums of all time. In association with the Quaker-sponsored radio serial, The Challenge of the Yukon, cereal eaters were offered the chance to own "the deed to one square inch of Yukon land". Twenty-one million packages of the puffed cereals were sold, each containing a deed for a small piece of the Canadian territory.

Unfortunately for anyone holding a deed today, Quaker lost ownership of the land to the Canadian government because of the company's failure to pay $37.20 in property taxes. Fortunately, those deeds are worth more on eBay as memorabilia than they ever were on the property market.

Additional Images
These are the most recent images. Click here to see all pictures for Puffed Rice (Quaker).


Upload an image for this cereal
Comments About This Cereal
What do you think of Puffed Rice (Quaker)?

View all 78 comments for this cereal.

Please bring back my favorite cereal of all time. Want non-sugared breakfast - puffed rice. Need a midnight snack - butter browned puffed rice. Candy for grandkids - puffed rice bars. It's the cereal that gets me off the hook with the diabetic and heart doctors. In 70 years, I still can find no substitute. PLEASE BRING PUFFED RICE BACK!

Why in the world did Quaker discontinue Puffed Rice cereal. It is the best cereal. Please bring it back. Thank you. -Connie

I live in CT. Where can I buy Puffed Rice cereal?

Loved it as a kid and still love it today!

Puffed rice cereal is the only cereal I can eat as a snack. I am allergic to the wheat cereals and I'm diabetic so the sugar cereals are out as well. BRING BACK THE PUFFED RICE.

My Uncle Paul had open heart surgery in May. His favorite cereal is Puffed Rice. Wish it was still around for him.

View all 78 comments for this cereal.