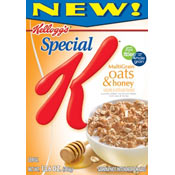 From: Kellogg's
Introduced in 2011


"After one taste of this cereal," says Kellogg's official website, "You may find yourself thanking honeybees. That's because the multigrain flakes and rolled oats are lightly drizzled with honey, which makes for a delicious way to start the day."

Upload an image for this cereal
Comments About This Cereal
What do you think of Special K Multigrain Oats & Honey?
There are no comments yet for this cereal. Be the first! Was it good? Was it bad?
Do you have information not included in the article? Let the world know!