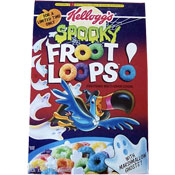 
This limited-edition Halloween-themed cereal was described on the box as a "sweetened multi-grain cereal with marshmallow ghosts!"

Each cereal box shows Froot Loops' famous mascot Toucan Sam being chased by ghosts. There were at least four different cereal boxes produced. All had similar scenes and, seemingly, the exact same cereal inside. On three of the boxes, Toucan Sam is wearing a cape and a witch-like hat. On one, he ditched the hat but still has the cape.

Company Description: Kellogg's was originally founded as the Battle Creek Toasted Corn Flake Company in 1906. The company's founder Will Keith Kellogg is credited with inventing corn flakes along with his brother John Harvey Kellogg. The company was renamed the Kellogg Company in 1922... Read on and see all cereals from Kellogg's
This cereal belongs to the following Mr Breakfast Cereal Families:
Upload an image for this cereal
Comments About This Cereal
What do you think of Spooky Froot Loops?

The 2019 version of Halloween Froot Loops is not good. The marshmallows were stale when I opened the box. Very disappointed.