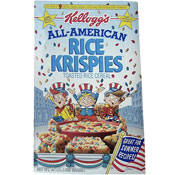 
This version of Rice Krispies Cereal came in "fun patriotic colors" which were red, white and blue. The front of the box showed the characters Snap, Crackle and Pop riding a car made of Rice Krispies Treats through a ticker-tape parade while being showered with colorful cereal pieces.

The side of the box featured a recipe for Rice Krispies Treats. 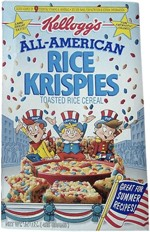 Submitter: Mr Breakfast
Uploaded: 5/7/2010
Additional details
Upload an image for this cereal
Comments About This Cereal
What do you think of All-American Rice Krispies?
There are no comments yet for this cereal. Be the first! Was it good? Was it bad?
Do you have information not included in the article? Let the world know!