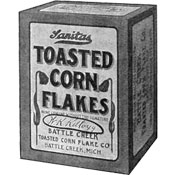 From: Kellogg's
Introduced in 1898

In 1907, the cereal cost 10 cents at all grocers, except for those store west of the Rockies where is had a price tag of 15 cents.

Developed by brothers, Dr. John Harvey Kellogg and Will Keith Kellogg, this cereal was introduced in 1898.

The cereal is known today as Kellogg's Corn Flakes. 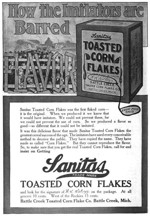 Submitter: Mr Breakfast
Uploaded: 3/27/2008
Additional details
Upload an image for this cereal
Comments About This Cereal
What do you think of Sanitas Toasted Corn Flakes?

My name is Charles R. Bolin Jr. My Great Grandfather was Charles D. who financed Kellogg. Please contact me. We have a lot to talk about.