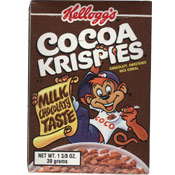 From: Kellogg's
Introduced in 1958

Company Description: Kellogg's was originally founded as the Battle Creek Toasted Corn Flake Company in 1906. The company's founder Will Keith Kellogg is credited with inventing corn flakes along with his brother John Harvey Kellogg. The company was renamed the Kellogg Company in 1922... Read on and see all cereals from Kellogg's
This cereal belongs to the following Mr Breakfast Cereal Families:
Cocoa Krispies Cereal Theater 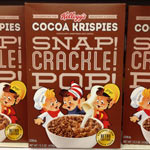 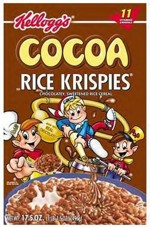 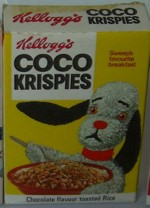 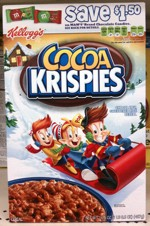 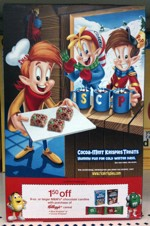 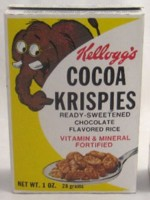 
Upload an image for this cereal
Comments About This Cereal
What do you think of Cocoa Krispies?

Wow, I had no idea Cocoa Krispies has been around since the 50's. Definitely one of my favorites.

Another cereal that - almost - makes me want to break out the Schneider's 2%, just like the old days. Always liked!

Kellogg's Cocoa Krispies cereal were WONDERFUL! I wish ALL the Kellogg's brands could come back in our lives. I know it would put a smile on so many faces (young or old).

Stays crunchy in milk, but the flavor tends to wash off the cereal. So far, my favorite chocolate rice cereal is Aldi's Millville Cocoa Rice.

I saw an adorable idea that we might try making for my kid's school party this year. Make Rice Krispies treats as usual using Cocoa Krispies, but instead of putting the treats in a pan, shape them into small golf ball sized balls. Insert a pretzel stick into each ball and then dip the balls halfway into melted chocolate. Then you can add sprinkles and let them cool! Doesn't that sound neat?