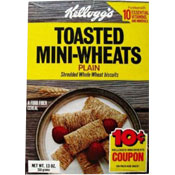 
We know that this cereal was sold in the U.S. in 1979. It was described on the front of the box as "shredded whole wheat biscuits."

The side of the box made the claim, "We have more vitamins on our side than most shredded wheats."

The back of one box when the cereal was first introduced described itself like this:

"Now the great crunchy flavor of Mini-Wheats comes to you in a plain, toasted whole wheat biscuit. The natural, good grain taste would be reason enough to enjoy Kellogg's new Toasted Mini-Wheats. But they also have the distinctive Mini-Wheats shape that makes them easy to serve and easy to eat.

"The best thing about this new cereal, though, is that Kellogg's has made the natural, nourishing goodness of whole grain wheat even better. No other Mini-Wheats gives you both."

Submitter: jeffrey
Uploaded: 10/29/2010
Additional details
Upload an image for this cereal
Comments About This Cereal
What do you think of Toasted Mini-Wheats?
There are no comments yet for this cereal. Be the first! Was it good? Was it bad?
Do you have information not included in the article? Let the world know!