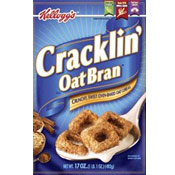 This cereal has been described on the box as a "crunchy, sweet oven-baked oat cereal." The original name of the cereal was Cracklin' Bran, without the "oat". The cereal was introduced under that name in 1977.

We assigned 1988 as the year Cracklin' OAT Bran was introduced as that's the first year we could find any advertising or cereal boxes for it.

Early ads for Cracklin' Oat Bran focused around the concept of loved ones (spouses or children) finishing a box and then deviously denying they ate it. The tagline was usually "an open box is an empty box." 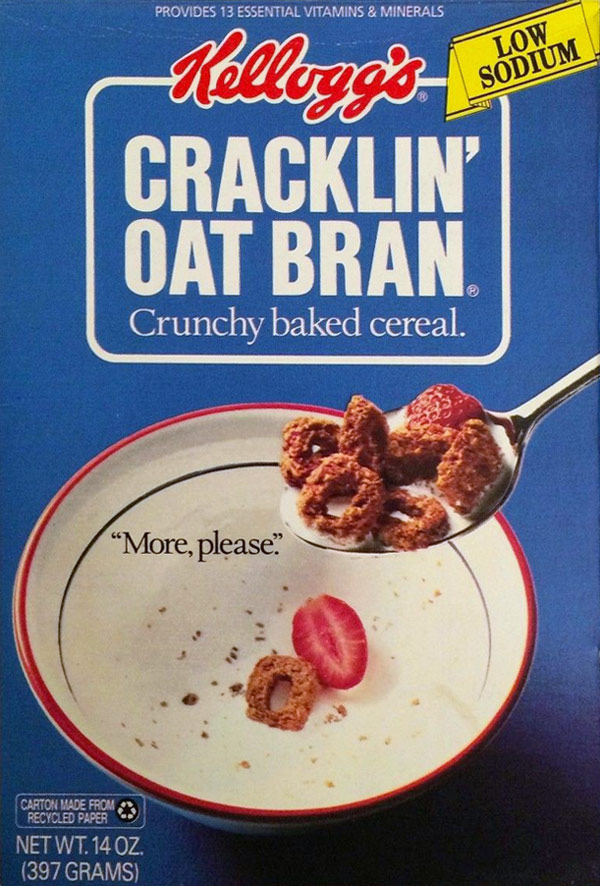 The back of one box from 1992 described how the cereal can also be enjoyed as a snack under the heading "Bowl and spoon optional":

"You don't have to have breakfast to have Cracklin' Oat Bran. Try it in your lunch box. Over ice cream. And, of course, straight from the box. After all, it's not just an oat bran cereal - it's toasted crunchy sweet. It's irresistible. Go ahead. Open a box of Cracklin' Oat Bran in the morning. And take the rest of the day to enjoy it." 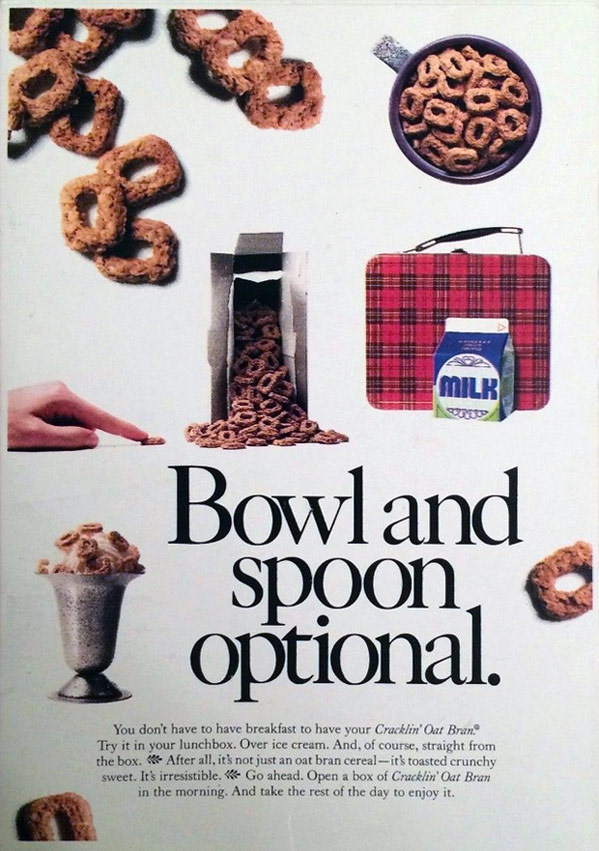 A 1992 television commercial showed a woman enjoying a bowl of the cereal intercut with scenes of a group of grandmothers preparing to jet ski and enjoying a luau. This is the voice-over from that ad:

1992 Cracklin Oat Bran Ad
Upload an image for this cereal
Comments About This Cereal
What do you think of Cracklin' Oat Bran?

I haven't had it in a while, and I believe the recipe did change a bit over the years, but it was pretty delicious. It used to have a more glossy look to it that more recent examples lack, possibly due to a reduction in sugar or fat or something. I ate it dry all the time, and that's probably the best way to experience it. Of course, I also routinely referred to it as "Cacklin' Goat Man," because I'm a complete weirdo, so what do I know?

This is my favorite cereal ever. Sometimes I have it for breakfast, or sometimes I crunch on it dry as a snack. High fiber, so it is not only taste, its good for you. My little grandson looks for it, whenever he stays with us. - Anthony

I love it! Why can't I find it anywhere? All stores near me are out. Been over 2 weeks. What's going on?!

It's been my family's favorite sweet cereal for years. Even though it's pretty expensive, it has a great taste for snacking, breakfast, or whenever else. I don't know that I would necessarily say it tastes like cookies, but I can definitely see the comparison.

As a kid and as an adult... one of my all time favorite foods (not just cereals). I love that taste.

OMG... this stuff is amazing. Each piece is like a little crunchy oatmeal cookie. Better off as a dessert item than breakfast.

Amazing cereal! Tastes like cookies but the name sounds healthy so you totally have an excuse to eat it.

Love the stuff and I have ever since before they added the "Oat". I think my folks were wishing I didn't love such a small box for such a high price, but at east it wasn't sugar bombs. Anyway, still love the stuff.

This is Brian from New Jersey and I also got my fiance addicted to this. She takes a small bag of it to work every day and snacks on it dry. Everyone I introduce it to comments that it looks like cat food. This has been my favorite cereal ever, for the past 15 years. I think more people would love it, if Kellogg's got the word out and advertised more. Hope they never stop making it.