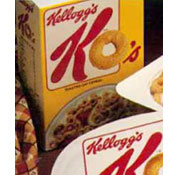 From: Kellogg's
Introduced in 1985


This cereal was described on the box as a "toasted oat cereal." It looked remarkably similar to Cheerios from General Mills. 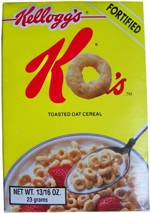 Submitter: Heather_S
Uploaded: 9/15/2009
Additional details
Upload an image for this cereal
Comments About This Cereal
What do you think of K-O's?
By Lionhearted

Is this the same cereal as Kellog's K-O Oats? The first character I remember associated with the cereal was a lumberjack, then Yogi Bear got the job.