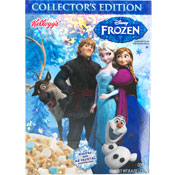 
The complete name of this Collector's Edition cereal is Disney Frozen Cereal. It's described on the box as a "sweetened cereal" with "snow and ice crystal marshmallows". It first appeared in stores in December 2014, but had a much wider availability at the beginning of 2015.

One side of the box featured the the characters Elsa and Anna while the other side had a group image of characters Anna, Elsa, Kristoff, Sven and Olaf.

It's interesting to note that this cereal's release did not coincide with the release of the animated film Frozen (as most movie tie-in cereals tend to do). The movie came out in November 2013. The cereal came out just over a year later. 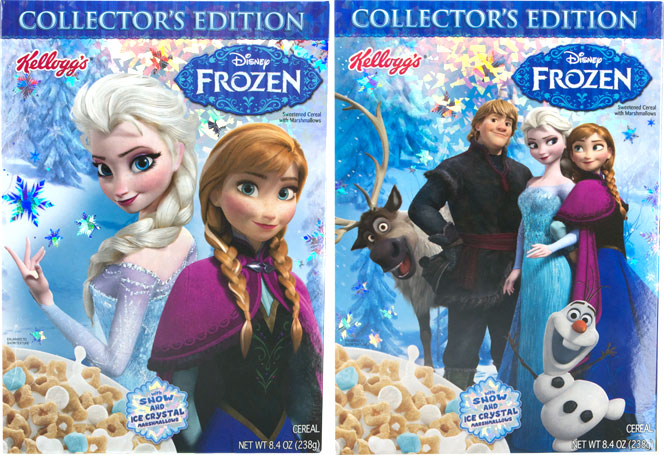 We have reason to believe that a different Frozen cereal was introduced or test marketed in Mexico. We've found images of cereal boxes but no other information to help us verify the cereal's existence. If you have information, please comment below. 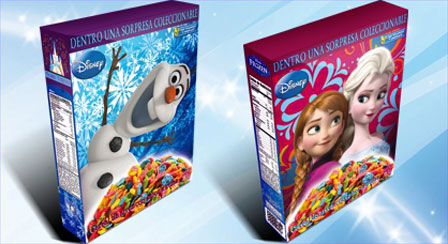 Click here to see all cereals from Kellogg's.
This cereal belongs to the following Mr Breakfast Cereal Families:
Additional Images

Submitter: Mr Breakfast
Uploaded: 2/6/2015
Additional details
Upload an image for this cereal
Comments About This Cereal
What do you think of Frozen?

By Is What It Is