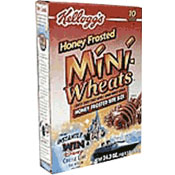 
This cereal was described on the box as a "whole grain wheat cereal with a touch of honey... bite size... made with real honey!" The layered wheat biscuit pieces were similar in appearance and texture to other cereals in the Bite Size Mini-Wheats product line.

The back of one cereal box had this to say: "Kellogg's Honey Frosted Mini-Wheats stack up great against the competition. After all, it has a terrific taste, the natural goodness of honey and it's an excellent source of whole grain nutrition and fiber."

Upload an image for this cereal
Comments About This Cereal
What do you think of Honey Frosted Mini-Wheats?
There are no comments yet for this cereal. Be the first! Was it good? Was it bad?
Do you have information not included in the article? Let the world know!