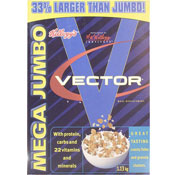 
This Canadian cereal is shown on Kellogg's Canadian website as Vector* Meal Replacement, where they suggest that Vector is a good source of protein, vitamins and minerals when it's combined with skim milk.

The cereal is combination of rice and wheat flakes and granola clusters. 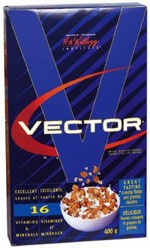 Submitter: pancakegirl
Uploaded: 11/25/2008
Additional details
Upload an image for this cereal
Comments About This Cereal
What do you think of Vector?

Box says 'imported by Kellogg's Canada in Mississauga Ontario'. Imported from where?

Where can I get it in the US?

Have eaten Vector 5 days a week with a banana & skim milk, since it was introduced 20 yrs. ago, the only cereal that doesn't get soggy before you can finish eating it. Have never found it on our travels in USA. Does the nutrition claims not pass FDA muster, is it sold in Mexico or elsewhere on the planet, or exclusively to health conscious Canucks?

Tried this in Canada years ago, don't really recall precisely why. Was hooked in an instant: crunchy, slightly sweet, touch of cinnamon. Luckily I live minutes from Canada in the US, but I can't understand why they've never tried selling it here. Stays crunchy in milk, tastes great, somewhat healthy. Just got like 10 more boxes on the last trip. Gonna be interesting if border patrol stops me and finds a bunch of Vector one of these days.

This cereal is SO AWESOME, people! If you haven't tried it, you're missing out.

Super boosting cereal. I take 1 1/4 cup with a banana and unsweetened almond milk... The bomb!

Why is there BHT in Vector? I was disappointed to see that. I will think twice before I buy it again.

It's interesting for me. I really like the first few bowls, but then it loses some of its appeal. Still, it's a great bargain, especially when it's on sale.

I find Vector cereal to be absolutely terrible.