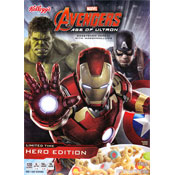 
The complete name of this cereal is Marvel Avengers: Age Of Ultron Cereal. It's described on the front of the box as a "sweetened cereal with marshmallows". On the side of the box, the marshmallows are referred to as Avenger Team Marshmallows.

The cereal first appeared in stores in April 2015. The box refers to itself as a "limited time hero edition" and features the Marvel characters Iron Man, Incredible Hulk and Captain America. Many people speculate that a "limited time villain edition" may also be released.

The back of the box features an "Assemble The Message" word game and promotion to use a code within the box to "Collect And Get Movie Tickets" by visiting a website. 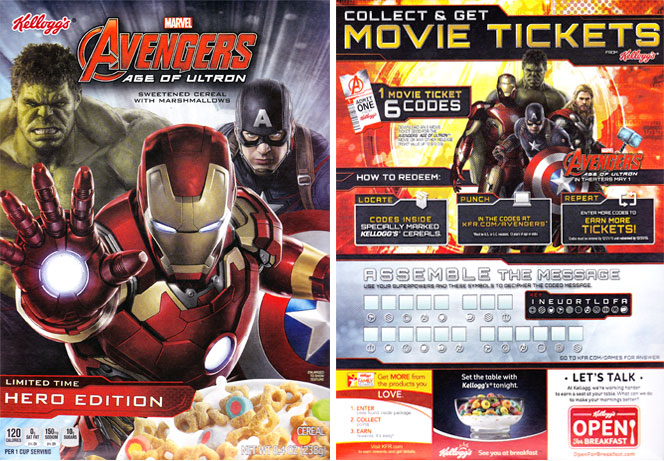 The film Avengers: Age of Ultron (which premiered the same month as the cereal) stars Robert Downey Jr., Chris Hemsworth, Mark Ruffalo, Chris Evans and Scarlett Johansson. It was directed by Joss Whedon. 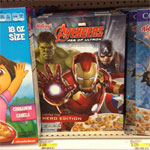 Submitter: Mr Breakfast
Uploaded: 4/23/2015
Additional details
Upload an image for this cereal
Comments About This Cereal
What do you think of Avengers?

Terrible cereal! Lazily done. The cereal pieces are bland and tasteless, insubstantial and forgettable. The marshmallows are OK, but there aren't enough of them. Avoid!

This Avengers cereal had so much potential, but when I had my first bowl, it tasted so generic that it was the exact same thing as Lucky Charms. They could have at least put more effort into it, like they did back in the day. The only thing I liked about it was the box, excellent packaging.

This cereal is probably really good. I haven't tasted it yet, but it looks sweet and I like marshmallows. I really like the Avengers so I hope this cereal doesn't mess that up for me.