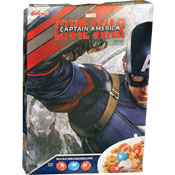 
The full name of this product is Marvel Captain America: Civil War Cereal. It's described on the box as simply a "sweetened cereal with marshmallows." The main cereal pieces have holes like Cheerios but they are more square and puffy. The marshmallows are shaped and colored like red and blue shields.

The box (as first introduced) features Captain America on one side and Iron Man on the other.

The feature film Captain America: Civil War is scheduled to hit theaters in May 2016. The cereal first began appearing in stores in January, four months before the premiere. 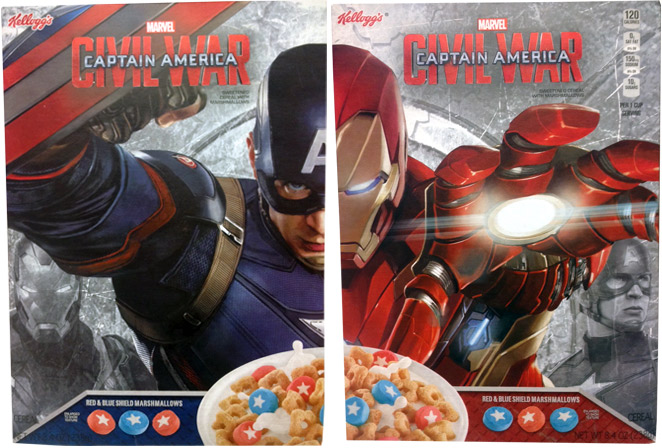 Company Description: Kellogg's was originally founded as the Battle Creek Toasted Corn Flake Company in 1906. The company's founder Will Keith Kellogg is credited with inventing corn flakes along with his brother John Harvey Kellogg. The company was renamed the Kellogg Company in 1922... Read on and see all cereals from Kellogg's
This cereal belongs to the following Mr Breakfast Cereal Families:
Captain America: Civil War Cereal Theater

Tastes like a plastic and chemical version of Lucky Charms. I had trouble even swallowing it.