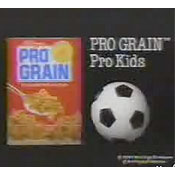 
According to a television ad, "Pro Grain helps you feel like a pro."

The New York Times referred to Pro Grain cereal as "a cold breakfast cereal that combines wheat, oats and corn puffed up and resembling Cheerios joined at the waist."

The president of Kellogg North America in 1987, Horst W. Schroeder, said the new product was formulated specifically with the dietary needs of young adults in mind... it was the first cereal specifically for this age group.

The cereal box featured a round seal calling Pro Grain an "Ironman Food". The rights to the seal were obtained through a licensing agreement with the Hawaiian Triathalon Corporation.

Sadly, this "Ironman Food" contained 39% sugar and it was discontinued shortly after its introduction. 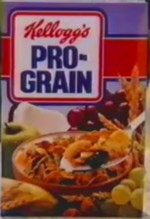 Submitter: jeffrey
Uploaded: 12/16/2010
Additional details
Upload an image for this cereal
Comments About This Cereal
What do you think of Pro Grain?

When I was a teenager, I would eat that stuff a box at a time. I loved it. It is the greatest cereal of all time. Why did they stop making it?

Loved it! Wish they'd bring it back!

I was 12 when I saw this, and I remember this commercial by heart: "Wheat, corn, oats... Thiamin, Niacin, Riboflavin". And this Mark Allen guy, he was in great shape, riding his bicycle and I thought, I want to be in shape, too. I remember it tasting good, and in a mostly orange box. Very Good.

I remember that commercial and thinking, Riboflavin... I gotta have some of that!

It was really crunchy, I would eat a bowl right now if I could.