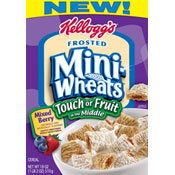 From: Kellogg's
Introduced in 2011


The complete name of this cereal is Frosted Mini-Wheats Touch Of Fruit In The Middle. Upon its introduction, the cereal came in one flavor: Mixed Berry. Kellogg's official website described the cereal as a "lightly sweetened whole grain cereal with real fruit filling."

Fans of Kellogg's cereals may be reminded of two cereal the company produced some 3 decades earlier: Apple Cinnamon Squares and Strawberry Squares.

In 2014, Kellogg's introduced a new raisin variety of Mini-Wheats Touch of Fruit in the Middle. According to the back of that cereal's introductory box: "It's a whole new touch of fruit. Packed inside Frosted Mini-Wheats is a delightful filling made with real raisins. Perfectly sweet and crunchy, each spoonful starts your day with tasty, wholesome goodness." 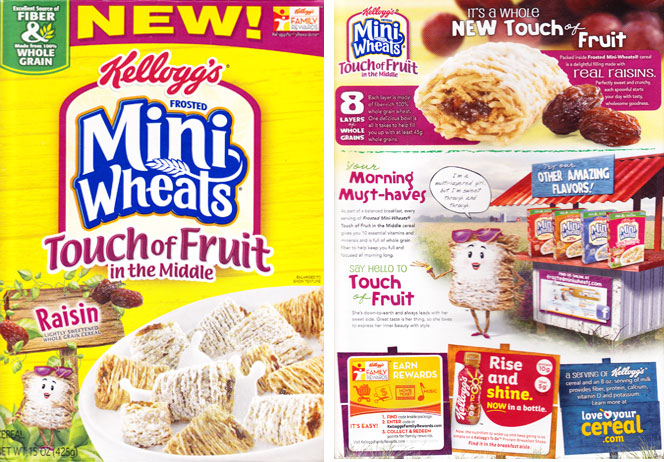 Frosted Mini-Wheats: Touch Of Fruit Cereal has been reviewed on MrBreakfast.com. 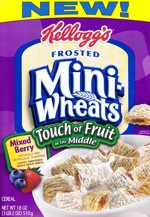 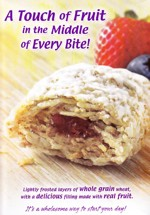 click to enlarge
Touch Of Fruit Frosted Mini-Wheats - Back

Submitter: Mr Breakfast
Uploaded: 2/8/2011
Additional details
Upload an image for this cereal
Comments About This Cereal
What do you think of Frosted Mini-Wheats: Touch Of Fruit?

Please bring it back... the raspberry was the best.

My friends and I made it a goal to eat as many different cereals as possible one year, the raspberry flavor was one of the earliest in the bunch and consistently maintained its position in the top 5, both for myself and our panel of judges. At this time, it is no longer available in the pacific northwest region, the last time I was able to find it in stores was several months ago in Florida. If anyone would like to join in my cause to plead Kellogg's to bring it back, it would certainly be worth it.

By Touch of Jen

It's a really good cereal. Sadly, that usually means it won't last long. Hope I'm wrong. Try it while you still can.