Founded by C.W. Post, the company began in 1895 in Battle Creek, Michigan under the name Postum Cereals. Their first product was a coffee substitute called Postum. The first breakfast cereal to come from the company was Grape-Nuts in 1897.

In 1929, The Postum Cereal Company acquired General Foods, producer of Birdseye frozen foods. Postem Cereal decided to adopt the name of their newly acquired company and was henceforth known as The General Foods Corporation.

The Philip Morris Companies acquired General Foods in 1985 and subsequently merged with Kraft Foods in 1987. 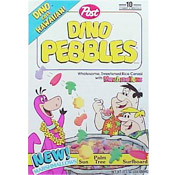 Cereal Spotlight:
Dino Pebbles Cereal
Introduced in 1990
This cereal was described on the box as a "wholesome sweetened rice cereal with marshmallows." The marshmallows were purple, yellow, orange and green dinosaurs, ala Dino - the TV cartoon character from The Flintstones. Later, marshmallows shaped like suns, palm trees and surf boards... Read More

Honey Bunches of Oats with Almonds

Honey Bunches of Oats with real Apples and Cinnamon Bunches