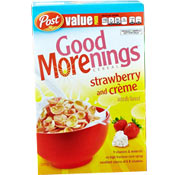 
Post has described the cereal like this: "In every box of Good Morenings Strawberry and Creme, you’ll find crispy flakes of corn and wheat that are sweetened with natural strawberry flavors to make your morning berry bright."

Upload an image for this cereal
Comments About This Cereal
What do you think of Good Morenings: Strawberry And Creme?

Was it good? It was way better than just good. The strawberry flavor bursts out of the flakes! It was Nestle Quick memories gone wild! I love this cereal! It is hard to find but when I do... I buy several boxes. I even got my relatives in another city to try it and they love it too! So, please make it more available!