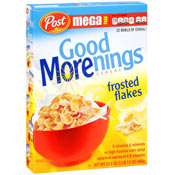 
One of the original cereals in the Post Good Morenings line of cereal that was introduced in 2012. The cereal looked liked other Frosted Flakes cereals except the pieces were a bit more uniform and slightly Frito-like.

We believe this cereal has been discontinued. It no longer appears on the company's website.

The original like of Post Good Morenings cereal consisted of this cereal and Cocoa Cinnamon Crunch, Strawberry And Creme, Berry Loops, Waffle Crunch and Vanilla O's.

Upload an image for this cereal
Comments About This Cereal
What do you think of Good Morenings: Frosted Flakes?
There are no comments yet for this cereal. Be the first! Was it good? Was it bad?
Do you have information not included in the article? Let the world know!