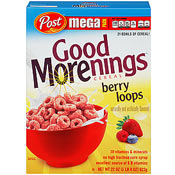 Upload an image for this cereal
Comments About This Cereal
What do you think of Good Morenings: Berry Loops?

I LOVE this cereal! Sadly, I can't find it anywhere anymore! :( The berry flavor was quite fruity and somewhat intense. Tastes similar yet much better (to me) than the red berry-flavored monster cereal. It tastes more real.