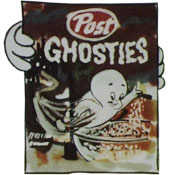 Post Ghosties was developed to the point that a scratch commercial was created consisting of filmed story boards and a rough audio overlay including a jingle sung by Casper The Friendly Ghost. While we don't know if an actual edible cereal was ever created, the narrative of the commercial indicated that Post Ghosties would have been a corn cereal "tumbled" in honey.

The character of Casper first appeared in a childrens story book in the late 1930's. He then went on to star in a series of cartoon shorts for Paramount in the 40's and 50's. In the early 60's, Casper began appearing on network TV, most notably in ABC's 1963 program The New Casper Cartoon Show. Casper has remained a popular cartoon and comic book character ever since. In 1995, a full-length motion picture titled Casper starring Christina Ricci and Bill Pullman appeared in theaters.

If you have any information pertaining to the date the scratch commercial for Post Ghosties (screen captures below) was made, please leave a comment below. 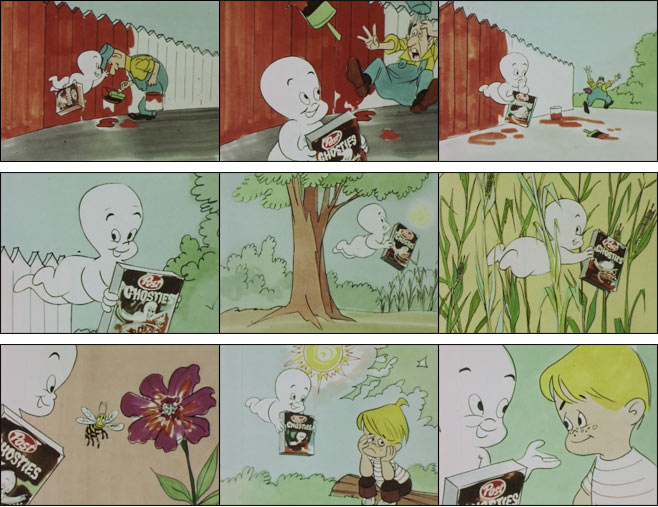 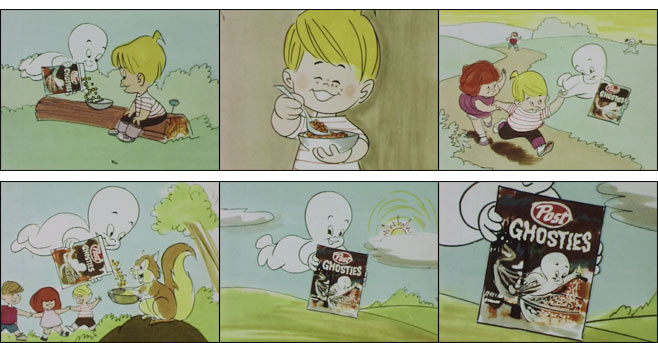 You'll love sweet corn when it's tumbled in honey

Company Description: Founded by C.W. Post, the company began in 1895 in Battle Creek, Michigan under the name Postum Cereals. Their first product was a coffee substitute called Postum. The first breakfast cereal to come from the company was Grape-Nuts in 1897... Read on and see all cereals from Post
This cereal belongs to the following Mr Breakfast Cereal Families:
Ghosties Cereal Theater

Now Showing: 1960's Post Ghosties Scratch Commercial
Upload an image for this cereal
Comments About This Cereal
What do you think of Ghosties?
There are no comments yet for this cereal. Be the first! Was it good? Was it bad?
Do you have information not included in the article? Let the world know!