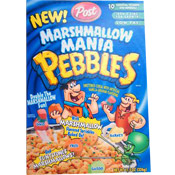 
This cereal consisted of cereal pieces with green and red specks and marshmallows in the shapes of The Flintstones characters Fred Flintstone and Barney Rubble.

This cereal is no longer with us. However, Post gave us Marshmallow Pebbles in 2010 - a cereal that's very similar in name and appearance.

Marshmallow Mania Pebbles Cereal has been reviewed on MrBreakfast.com.

The cereal is now back under the name Marshmallow Pebbles, just saw it on postcereal.com, not sure when it will be on shelves but they are clearly showing it as there new item on there website.

This cereal wuz my cereal when it first came out but after only a year of me eating it, sadly it left shelves. Why don't they make this anymore. Other than the long missed French Toast Crunch, this wuz one of my ultimate favorite cereals. =( I really hope they bring it back.

Andrew, I hear they are releasing a Marshmallow Pebbles again this summer... be on the look out.

Wow 2005 was really a great year for new cereals. This, Mini Swirlz varieties, Peanut Butter Toast Crunch, Peanut Butter Cookie Crisp, ect. It's hard to believe all the cereals aforementioned have been discontinued. Back on topic though, MMP was one of my favorite cereals. The vanilla cake-like pebbles, mixed with the soft vanilla marshmallows was a delicious mix. I couldn't get enough of this cereal for the year it was on shelves. I heard it was very similar to the original Dino Pebbles. Too bad both are discontinued... :(

I love this cereal.