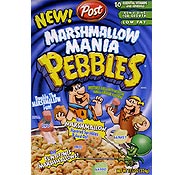 It's a festive looking cereal. Green and red specks in the cereal pieces make it look like a limited-edition holiday cereal. I got a laugh from the marshmallows that are supposed to look like Fred Flinstone and Barney Rubble. My finger looks more like these characters than the marshmallows do. I was glad to see the Great Gazoo character on the box. For a Flinstones refresher, this was the prime-time cartoon's jump-the-shark character - a little green alien who would appear to Fred at inopportune times and fail to appear when our hero needed him most. His marshmallow looks like a candy Valentine heart that got wet.

I'm sad to report that this is a very unnecessary cereal. It tastes fine - a sweet marshmallow taste just as the box promises. The problem is that its flavor is a carbon copy of several cereals already on the market... most notably Luck Charms. Sure, I know - half the cereals on the market are rip-offs of other cereals... so the relatively high rating I'm giving here is what I'd give Lucky Charms minus one egg for lack of originality.

1 gram of saturated fat per serving. 0 trans fats. 110 calories. A serving size is only 3/4 of a cup so double those numbers if you eat realistically. But good news for the weight-conscience fat-watchers: zero times zero equals zero.

Comments About This Product Review
What do you think of Marshmallow Mania Pebbles?

This cereal is back, it's now called Marshmallow pebbles but it is clearly on posts website as a new cereal just out. I am thrilled can't wait to see it on the shelves.

This is my favorite cereal ever.

Please bring it back!!

Where to get this cereal at?

This was delicious. I wish I could find it again.

This is without a doubt the best cereal I have ever had... but I haven't had it in 2 years!! Where can I get it?

My kids and I LOVE this cereal... please let me know where I can still get this.

I LOOK FOR THIS CEREAL EVERYWHERE... IT IS THE BEST CEREAL I HAVE EVER HAD!!!!!!! IS THERE ANYWHERE THEY ARE STILL SELLING IT THAT I COULD GET A LOT OF BOXES????

This cereal reminds me of a vanilla sprinkle cake with sprinkles mixed into the batter and frosting. Mmm. Slowing fading off the shelves in the stores near me... very sad.

Personally, I think this is a pretty good cereal. Other than having miniature marshmallows, it really tastes nothing like Lucky Charms. However, I do prefer to eat it dry as a snack. It loses a lot of it's flavor and becomes rather mushy in milk.