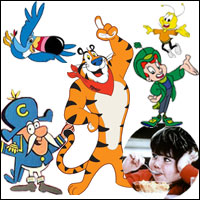 Plop, plop, fizz, fizz - Oh what a relief it is when advertisers come up with the perfect catchphrase or slogan to sell a product. This is our list of the most memorable lines ever used to sell a breakfast cereal.

Before you read the list, ask yourself, "Got Milk?" Because the best slogans not only bring the product to mind, they also make you a little hungry for Incredible, Edible... breakfast cereals.

See if your favorite tagline made the cut.

#20. "The cereal shot from guns"
The grandaddy of cereal slogans is for Quaker Puffed Rice. The cereal is actually made using a process that resembles shooting rice from a gun. In 1904, Quaker introduced the cereal to the mass public by shooting Puffed Rice from cannons at the World's Fair. In 1913, an astute ad man decided to promote the cereal by exploiting how it's made and this famous, yet mostly forgotten, slogan was invented.
More about Quaker Puffed Rice

#19. "Brings out the tiger in you, in you!"
Tony the Tiger may be the most famous breakfast cereal mascot of all time (and possible the most well known for any product). When you hear this slogan, you know exactly who the tiger is and the product he promotes. Most people automatically hear the musical jingle in their head. It's a triple whammy. You might say, It's Grrrr... (keep reading).
More about Frosted Flakes

#18. "What are you eating? Nutin' honey."
This slogan for Kellogg's Nut & Honey Crunch was a study in name reinforcement. When characters in commercials were asked what they were eating, their reply of "Nut & Honey" was misinterpreted as "Nutin' (ie. nothing) honey." By the time the person asking figured out what was going on (if they ever did), the name of the cereal had been spoken several times - so many times that it's now in our heads forever.
More about Nut & Honey Crunch

#17. "It takes (x) bowls of your cereal to match the nutrition in one bowl of Total."
This bold ad campaign would pit Total cereal against best-selling cereals in a battle of nutrition. TV ads would show characters enjoying their favorite cereal only to be told by an off-screen voice that they'd have to eat several bowls (usually quantified by an exact number) of their cereal to equal the vitamin nutrition in a bowl of Total.
More about Total

#16. "Stays crunchy, even in milk!"
When Cap'n Crunch cereal was introduced in 1963, the idea of a crunchy breakfast cereal was fairly new. In fact, the cereal was created as a response to a study that showed children, on average, didn't care for soggy cereals. This catchphrase (along with the obvious implication of the cereal's name) may be the reason we still hold Cap'n Crunch as the standard by which all crunchy cereals are measured.
More about Cap'n Crunch

#14. "Quisp for Quazy energy"
Early boxes of Quisp cereal claimed it was "the vitamin powered sugary cereal for QUAZY energy." Despite having quite a quirky and que-ative catchphrase, most people remember this cereal by a visual recognition of it's mascot, a pink alien with a propeller poking out of his head.
More about Quisp

#13. "It's a honey of an O..."
... It's Honey Nut Cheerios. This was the cereal's most famous tagline throughout the 80's. A later line, "nobody can say no to Honey Nut Cheerios," may have sold some boxes by never resonated in our collective memory. The cereal's current catchphrase, "Bee Happy, Bee Healthy" is a real contender to make this list in the coming years.
More about Honey Nut Cheerios

#12. "Kid tested. Mother approved."
This famous tagline for Kix Cereal first appeared in 1978. The cereal itself was introduced several decades earlier in 1937. According to ads, kids liked the crisp corn crunch, while moms liked nutritional aspects of the cereal. Another memorable line was "Kids love Kix for what Kix has got. Moms love Kix for what Kix has not."
More about Kix

#11. "Honey-Comb's big! Yeah, yeah, yeah! It's not small... no, no, no!"
According to the rest of the jingle, "Honey-Comb's got... a big, big taste... a big, big crunch... for a big, big bite!" The jingle was popular throughout the late-70's and early-80's. In TV ads, it was often sung by kids in the Honey-Comb Hideout, a plank board shack where youngsters met to appreciate the size and taste of the cereal.
More about Honey-Comb

#8. "Snap! Crackle! Pop!"
These are arguably the three most familiar words in the English language (which pertain to selling breakfast cereal). They were first heard in a radio jingle in 1932, four years after the cereal was introduced. They mimicked the sound the cereal made when doused with milk. In 1939, Snap! Crackle! and Pop! also began referring to the cereal's three mascots. That was the year they first appeared together on a package. Snap! had appeared years earlier as a solo act.
More about Rice Krispies

#7. "Follow my nose. It always knows."
This slogan for Froot Loops continues, "The flavor of fruit! Wherever it grows!" The "nose" in question belongs to Toucan Sam, the cereal's mascot since 1963. When the tagline debuted, the voice of Toucan Sam was provided by Mel Blanc who also created voices for Bugs Bunny, Daffy Duck and Barney Rubble.
More about Froot Loops

#6. "I'm coo-coo for Cocoa Puffs!"
This slogan for munchy, crunchy, chocolatey Cocoa Puffs was first heard in 1963. It was delivered by Sonny the Cuckoo Bird. In TV ads, the animated bird would go absolutely bonkers when exposed to the cereal, Most often, he would repeat the tagline three times in quick succession.
More about Cocoa Puffs

#4. "He likes it! Hey Mikey!'"
This catch phrase for Life Cereal is from the longest continuously running commercial campaigns in television history. It was 1972 when America first heard, "I'm not gonna try it - you try it. Let's get Mikey... he hates everything." In the end, the finicky young eater liked the cereal. The Mikey character reemerged in the mid-80's as a young adult (played by the same actor, John Gilchrist) in a tribute to the original commercial.
More about Life Cereal

#3. "They're Magically Delicious!"
This tagline was part of a short jingle that went "Frosted Lucky Charms... they're magically delicious!" It was sung by Lucky The Leprechaun, the cereal's mascot since Lucky Charms debuted in 1964. Lucky is responsible for another famous catchphrase, "They're Always After Me Lucky Charms!"
More about Lucky Charms

#2. "Silly Rabbit, Trix are for kids!"
Trix cereal first hit shelves in 1954. Four years later, the Trix Rabbit appeared on the box. In his words, "Rabbits are supposed to like carrots. But I hate carrots. I like Trix." Unfortunately, every time the rabbit would get close to eating Trix, some kid would appear and say the famous line. In 1980, General Mills ran a promotion asking kids to vote whether or not the Rabbit should get to eat Trix. The nation's kids voted in favor of the rabbit. He got to eat one bowl.
More about Trix