Doughnuts have been around for centuries. Archaeologists turned up several petrified fried cakes with holes in the center in prehistoric ruins in the Southwestern United States. How these early Native Americans prepared their doughnuts is unclear.

Because of the inherent difficulty of deriving recipes from fossils, most historians begin discussions about doughnut history with the mid-19th century and the first recorded doughnut recipes. At this time doughnuts were known as olykoeks, or oily cakes, and it's primarily the Dutch who are credited with taking sweet dough balls and frying them in pork fat.

It was pilgrims from Holland who brought olykoeks to America. These doughnuts of our forefathers were usually prepared with apples, prunes or raisins in the middle. There was a problem with doughnuts back then. When the olykoeks were pulled from the frying kettle, the centers were rarely fully cooked. By inserting a filling that needed only to be warmed, a temporary solution was achieved. But how was the doughnut ever to be cooked evenly in the center?


A Hole In One

There is a very popular half-truth in doughnut lore centered on a very real sea captain and his mother. In 1847, Elizabeth Gregory was known in her New England circle to make a very fine olykoek. Her secret was to add a hint of nutmeg and fill the center with hazelnuts or walnuts. She even had a special name for her creation -- dough-nuts. (A more plausible explanation of the name is far less exciting, early recipes instructed amateur chefs to create "little nuts of dough" and place these balls into the hot oil.)

As legend has it, Mrs. Gregory sent her son Captain Hanson Crockett Gregory on one of his sea voyages with several dough-nuts and her recipe to make more. It is here that one legend branches off into several versions. In one variation, Captain Hanson found himself having difficulty steering his ship and holding his dough-nut at the same time. The quick-thinking swabby impaled his dough-nut on one of the spokes of his steering wheel. Satisfied with his new dough-nut holder, he ordered his cook to henceforth prepare all dough-nuts with holes in the center.

Another variation of the legend might be easier to swallow. Simply stated, the Captain didn't like the nuts and he poked them out. Acting on his Captain's request, the ship's cook created all subsequent doughnuts with the centers removed using the top of a round tin pepper box as a cutter.

Did Captain Gregory invent, as he stated to the Boston Post, "the first dough-nut hole ever seen by mortal eyes"? We may never know. However, we can be sure of the positive changes that happened to the doughnut during the corresponding period in time. Olykoeks with holes in the center cooked far more evenly and the novelty of the new-found "doughnut-shape" would soon propel the doughnut to a popularity deserving of myths and legends. 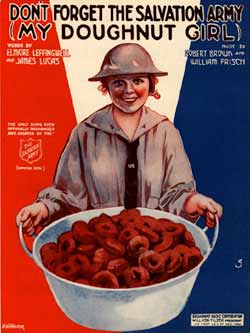 During World War I, the doughnut had already achieved status as an American favorite. Young American men fighting oversees were served doughnuts by grateful Frenchmen as a reminder of the food back home.

By the 1920's, doughnuts were being mass-produced. Their association with breakfast was only just beginning and the doughnut was more popular as a snack in theaters. To satisfy the growing demand for doughnuts in one New York neighborhood, a Russian expatriate named Adolph Levitt created the first doughnut machine. By 1934, the same year that the World's Fair in Chicago declared the doughnut "the food hit of the Century Of Progress", Levit was pulling down twenty-five-million dollars annually for the sale of his doughnut machines to bakeries.

The 1940's and 50's, saw the advent of doughnut chains such as Krispy Kreme Doughnuts and Dunkin' Doughnuts. As coffee became more of a staple in bakeries across the country, the perception of the doughnut as a breakfast item became more prevalent. There seemed to be no stopping the oily cake.

But alas, at the height of civil rights turmoil and our nations tribulations as the so-called "policeman of the world", so too did the doughnut face its share of troubles. The popularity of "fancy cakes" seemed to obscure what a doughnut actually was. The German bismarck had gained incredible momentum as a top-seller in bakeries. Glazes of every imaginable flavor, color and texture relegated the original olykoek to the rank of "plain doughnut" and even that was often confused with sugar-glazed raised cakes.

Just as the number doughnut shops grew exponentially in the 1940's and 50's, corner shops hawking something called a bagel grew in the 1970's and 80's. Being washed aside by the tide of bagel popularity, doughnuts, whatever they were, were being seen as the backwater hick cousin to its city-slicker alternative. But worst of all, the doughnut was being called unhealthy.

Pay no mind to the fact that a bagel with cream cheese has over 450 calories; the doughnut was called out time and time again for it's average 300 calories per cake. So, what was a doughnut to do?


The Return Of Comfort Food

In the 1990's, America traded in its leg warmers for more comfortable shoes. Computer-driven pop was replaced by, of all things, guitars. As the cocaine buzz of a confused era wore off, we sought comfort from simpler things. And what was simpler than a doughnut?

In 1998, Winchell's House of Donuts in Pasadena, CA created the world's largest doughnut. It weighed 5,000 pounds and stood 95 feet in diameter. While it was made to celebrate the 50th anniversary of Winchell's, the giant apple fritter symbolized something more. It had been 150 years since Elizabeth Gregory sent her son to sea with a special batch of olykoeks. Like Captain Gregory's voyage, the journey of the doughnut into modern times had its share of turbulent waters, but the doughnut survived.

Krispy Kreme Doughnuts went public in 2000. By the end 2001, its stock price had increased fourfold. The following year, their earnings grew 49%. As internet company after internet company failed, the doughnut remained a symbol of prosperity. Analysts can argue that Krispy Kreme's stock has been selling far above the company's estimated earnings, but nobody can argue with the sweet smell of a doughnut shop in the morning.

Future Archaeologists may one day find the fossilized remains of our own doughnuts. "Native Americans ate oily cakes", they will write. The doughnut will outlive us all.