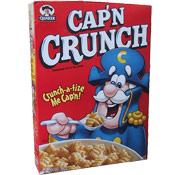 From: Quaker
Introduced in 1963

Attempting to create a cereal that would satisfy crunch lovers, Quaker created a corn and oat cereal with a pillow-shape and a butterscotch-tinged sugar coating. The cereal didn't have a name, but it had what the company was looking for... crunch.

To name the cereal, Quaker turned Compton Advertising, a firm that was considered hot at the time, in no small part due to innovative campaigns they'd created for Tide detergent. The company came up with the idea to give the cereal and its mascot the same name... something that would push "crunch"... and Cap'n Crunch was born.

To put a face with the idea, Quaker hired Jay Ward Production, an animation company most famous for creating the characters Rocky and Bullwinkle. To put a voice with their new Cap'n Crunch character, Jay Ward hired Daws Butler, a voice actor who'd also provided the voice for Yogi Bear and Huckleberry Hound.

In 1963, the first Cap'n Crunch commercial aired nationally. The cereal was an instant hit. Within two years of it's introduction, it'd become the 9th best-selling cereal in America.

Almost 50 year later, the blue-suited captain with a "C" on his hat still appears on boxes of Cap'n Crunch cereal. At least 25 spin-off cereals have been created between 1963 and 2008 - some more successful than other, but everyone featured Cap'n Crunch as a character on the box (except for Mystery Crunch and few boxes during campaigns where kid's were supposed to guess why the Cap'n wasn't on the box). 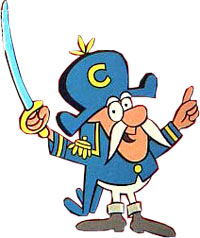 Cap'n Crunch has some enemies. When Cap'n Crunch cereal was first introduced, his foe was an animated, barefoot pirate named Jean LaFoote.

In the 80's, a live-action LaFoote played by an actor in a false mustache would try to sneak Cap'n Crunch cereal from unwitting kids.

Crunch has also been seen battling The Soggies, blobs that have the power to make cereal soggy.

Early Cap'n Crunch Commercial
▶ There's more! See All Videos For Cap'n Crunch
Additional Images
These are the most recent images. Click here to see all pictures for Cap'n Crunch. 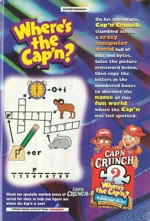 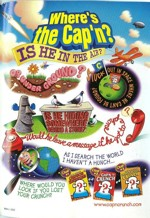 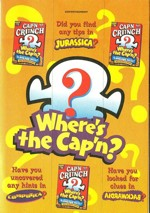 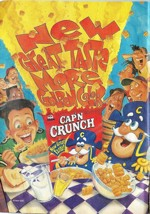 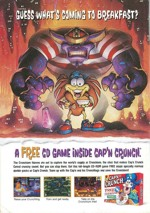 
Upload an image for this cereal
Comments About This Cereal
What do you think of Cap'n Crunch?

Has anyone noticed that the Quaker man has been taken off the boxes of Captain Crunch and Life and probably all the Quaker cereals? Not sure why they did this. He is an icon and should be on the boxes.

Love this cereal. It's so good!

I love Cap'n Crunch. It is the greatest thing to ever happen to the world. I live off of Cap'n Crunch. I am Cap'n Crunch. That sweet angel will forever be mine and I'm going to eat him so hard that he won't ever see it coming. I'm going to travel the world with my sweet crunchy prince until his cereal gets soggy. I am going to take each of his limbs and crunch them like the beautiful crunchy branches they are. But like seriously that cereal is pretty good.

One of my favorites as a kid and I still like the occasional bowl as an adult. The taste has held up.

Captain Crunch cereal is definitely one of the best. Why isn't Cap'n Crunch's Cinnamon Crunch listed here? I know many people didn't like it because it would get soggy too fast but I loved that cereal too!

Me and my mom Love Cap'n Crunch!!

By Used 2B Better

It was much better when I had this growing up in the 70's. Back then the crunch berries weren't hard as rocks, they were softer and they had a very strong berry smell and taste. Now, they are almost like gravel and they have none of that strong berry taste and smell. I don't know when they changed the formula but they ruined it. Cheaper is not always better.

Classic, great cereal, but you have to let it soak in milk for ten minutes prior to eating. Otherwise, you'll tear to shreds the roof of your mouth!