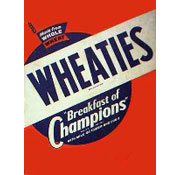 From: General Mills
Introduced in 1924

Wheaties began it's life under the name Washburn's Gold Medal Whole Wheat Flakes. As General Mills tell the story on the Wheaties website... the cereal was the invention of a Minneapolis clinician who accidentally spilled a wheat bran mixture on a hot stove which resulted in tasty wheat flakes.

The new invention found its way to the Washburn Crosby Company (a predecessor of General Mills). There, the recipe for the cereal was improved upon and prepared for mass production.

By the time the cereal was introduced in 1924, it was decided that the name Washburn's Gold Medal Whole Wheat Flakes was too long. An employee contest to name the cereal was won by an executive's wife, Jane Bausman, and Wheaties were born.


- - - - - - - - - - -
In 1931, Wheaties was the first cereal to use radio soap operas to sell cereal to children. The same advertising man who arranged for Ovaltine drink mix to be sold on the Little Orphan Annie radio show hooked Wheaties up with it's radio character - Skippy.

Skippy was a cross between Beaver Cleaver and Bart Simpson. The 15-minute show was a big success. A half-million kids joined the Skippy Secret Service Society - the application for which required a signed statement from mothers that their children were eating Wheaties.


- - - - - - - - - - -
In 1933, Wheaties began sponsoring one of the most popular radio serials of all time, Jack Armstrong - the story of an All-American high school student who get's in all sorts of crazy adventures. The show ran for 18 years. During that time 300,000 kids sent in Wheaties Box Tops for a Jack Armstrong Premium Stamp and 1,200,000 listeners sent box tops to receive a Jack Armstrong Hike-o-Meter.

Ding Dong School Wheaties Ad
Additional Images
These are the most recent images. Click here to see all pictures for Wheaties.

Submitter: malcolmw
Uploaded: 9/11/2020
This image is currently under review by Mr Breakfast.
If approved, a link to a larger version will appear here shortly. 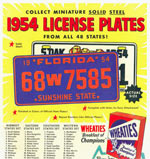 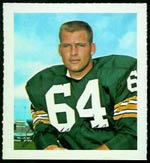 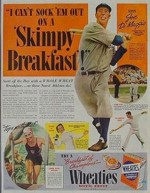 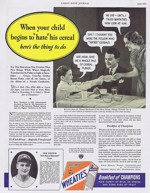 
Upload an image for this cereal
Comments About This Cereal
What do you think of Wheaties?

I bought a box of Wheaties at Hy-Vee East in Norfolk, Nebraska. It was good.

I am now in crisis! Although I have eaten Wheaties for 80 plus years and can't imagine living without them, it now appears I may have outlived the Battle Creek Wheaties machine. IT HAS BEEN OVER 3 WEEKS SINCE ANY SUPERMARKET IN SOUTHERN MAINE HAS HAD ANY WHEATIES IN STOCK. What's up? I will gladly return the 3 lovely sleeves of Wheaties golf balls I received for a few boxes of the product. Please don't tell me it is the end of the Wheaties era.

Loved it before my husband's celiac diagnosis.

They should make a maple coated version of Wheaties for those people that still crave Buc-Wheats.

How is this cereal still available and Post canceled production on Fortified Oat Flakes? Poor decision on Post's part. Never cared for Wheaties.

This cereal now has the texture and flavor of no brand generic cereal. Upon opening the bag, I sniffed for the Wheaties aroma and found none, then the disappointment of the taste told me I was eating something less than expected.

By No Sugary Sweet

Tastes different than it did when I was a kid - not as heavy, missing some of the old malt flavor. Still better than most - if you can still find it among a sea of sweetened empty-calorie offerings.

I grew up on Wheaties and thought they were amazing. Then someone at General Mills thought they should fix what wasn't broke and they introduced the "New Wheaties". Ugh! They now taste just like the rest of field. Oh how I long for the original cereal.