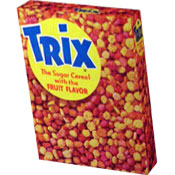 From: General Mills
Introduced in 1954


This cereal was described on early boxes as "goodness in fruit-flavor corn puffs." In 2008, the box called Trix "fruity sweetened corn puffs."

From it's inception until the early 1990's, the cereal pieces were multi-colored spheres. Around 1991, they changed the shape of the cereal pieces to resemble different fruits. Then in the mid-2000's, they reverted back to sphere-shaped pieces. Then in 2018, they brought back the fruit shapes with the box declaring: "Fruity shapes are back! Hurray For Fruity Shapes. The Trix Rabbit is throwing a fruitastically fun party to celebrate the return of fruity shapes." 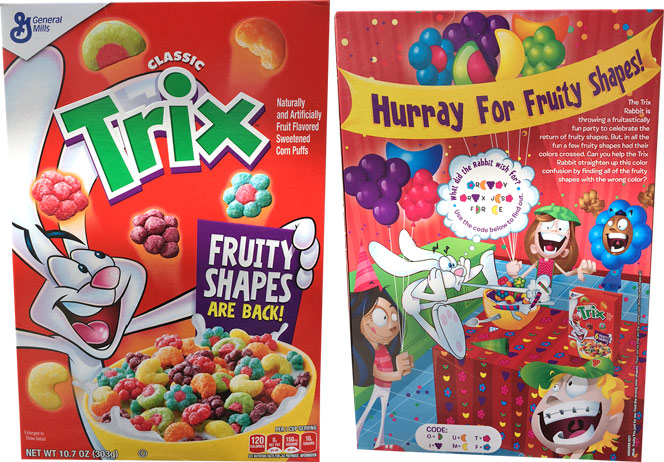 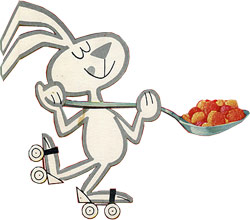 The Trix Rabbit first appeared on a box of Trix cereal in 1959... as a floppy hand puppet.

Before becoming a cereal mascot, the hand-puppet-rabbit preformed introduction on television shows sponsored by General Mills.

Nearly 50 years - and several animated face lifts - later, the Trix Rabbit is still one of the most famous characters in the cereal world. The phrase "Silly bunny Trix are for friends" has become so famous, that you could immediately tell I wrote it wrong.

Vintage Trix TiddlyWinks Commercial
▶ There's more! See All Videos For Trix
Additional Images
These are the most recent images. Click here to see all pictures for Trix. 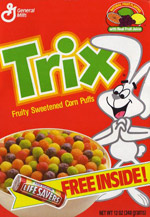 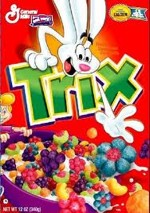 
Upload an image for this cereal
Comments About This Cereal
What do you think of Trix?

I love this cereal. I prefer the round pieces to the fruit shaped ones even though they taste the same. A great classic.

What was the exact year in the late 60's early 70's that Trix taught kids a magic trick to learn? I believe it was a little magic secret on how to do a trick, not a specific toy.

Bought a box of the Classic Trix. So delicious.

Hey good news everyone! The old Trix is back.

Found out General Mills is bringing back the original artificial colors for Trix. Great news.

For awhile, Trix tasted like the horrible Kix cereal. I gave it another shot because of a sale and was pleasantly surprised to find it is even fruitier than I remember the old Trix to be. I love it once again.

This used to be a very good cereal that would stay crunchy for a long time with a great fruit flavor. However, these days the fruit flavor has an off-putting metallic taste just like a tarnished spoon!

I heard the old Trix is coming back. Hope that's true. Mini Trix was a disaster.

I love Trix. I could eat it for every meal.

My granddaughter sent in for the Trix bunny's birthday and she was supposed to get a gift. This was last September and she never received anything. She asked every two weeks or so, I am very disappointed in General Mills and will not buy their brand anymore.