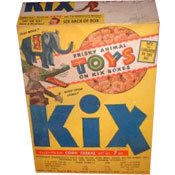 From: General Mills
Introduced in 1937


Kix cereal is comprised of small, pale-yellow, porous, round pieces. The first ingredient in the cereal is cornmeal and the cereal has an authentic corn-flavor.

Kix was created using a technology often referred to as a "puffing gun". Before Kix, this high-pressure cooking method was used almost exclusively to flash-cook, or "explode", grains of wheat and rice to create Puffed Wheat and Puffed Rice.

Kix took puffing to a new level as pellets of dough were shot through puffing guns to create a new kind of cereal piece.

The dough for Kix cereal was vitamin-fortified. Once the cereal was puffed, the pieces were then sprayed with more vitamins. The novelty of the cereal along promotional claims that Kix were more nutritious than corn flakes and other cereals of the day made Kix an instant hit.

In the mid-50's on the General Mills sponsored "Captain Midnight" television serial, Kix were referred to as "the crispy corn cereal that's 83% energy food".

The year 1929 presented a tremendous opportunity to those in search of a nonsoggy cereal, as the patents on the puffing process, developed and owed by Quaker, expired... The scientists (at General Mills) mixed corn meal, malted barely, vegetable oil, salt and sugar into a dough, and added vitamin B, vitamin D, phosphorus, and calcium. The dough was extruded through a die that shaped it into pellets. These pellets were dried on a belt blown by hot air until the desired moisture level was achieved. Then the pellets were blasted out of a puffing gun - the same sort of puffing gun used to make Puffed Wheat and Puffed Rice. The finished product landed in a large bin, which was then sprayed with more vitamins.

Kix Commercial: Upside-Down Box
Additional Images
These are the most recent images. Click here to see all pictures for Kix. 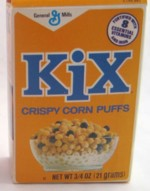 
Upload an image for this cereal
Comments About This Cereal
What do you think of Kix?

I would call this cereal mediocre... but it is OK with sliced bananas and a teaspoon of sugar. One of the few cereals my brother and I were allowed in the 70's (besides corn flakes, Rice Krispies and Wheat Chex). Mom was terrified of cavities by us eating sugary cereals. Interesting how KIX NEVER goes on sale - kind of pricey at $4.99 a box.

I bought a box of Kix this past weekend. GM has changed something about it. The color is different so I guess some of the dyes were taken out. However it tastes different. Not bad but different. I liked the original better.

I will eat just about any cereal that's on sale, but I wouldn't eat this if you gave it to me free. How it has stuck around for nearly 80 years is beyond me.

Does anyone have an image of the Kix box with "America's Regions". I'd be interested in obtaining an image. Private message me at info at indefenseofliberty.tv

The worst cereal ever! How can anyone eat this? The comment about cardboard in water nails it.

There was a short lived character on the KIX box in 1969 named Rick O'Kickme. The box was green in the background.

KIX made it into the top 100? Really? Totally tasteless (literally) cereal. Soak some cardboard in milk...

#1 cereal I just can not eat! This cereal is so nasty. (myemptycanvasreviews.blogspot.com)

I never insisted mom buy me KIX very often as a kid, cause my grandmother always had it on hand. I liked JETS better, which according to Grandmother had way too much sugar, besides I had that at home. I actually was attracted to the colors of the box. My grandparents thought,however it in poor taste having product packaging on the dinning table. Crushed it makes an excellent coating for chicken, chops or fish. It is after all basically corn meal.

ZZZZ, one of the most boring cereals ever! My mother used to buy this for me when I "misbehaved." I snuck into my Dad's sugar jar just to make the cereal edible.