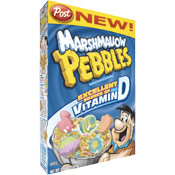 
In the summer of 2010, this cereal was described on the box as a "sweetened cereal with marshmallows" and an "excellent source of Vitamin D."

This cereal is similar in name and appearance to Marshmallow Mania Pebbles, a cereal introduced in 2005 which has since vanished.


When Marshmallow Pebbles was first introduced, the side panel of the box included a recipe for a snack called Quarry Crunch.


Company Description: Founded by C.W. Post, the company began in 1895 in Battle Creek, Michigan under the name Postum Cereals. Their first product was a coffee substitute called Postum. The first breakfast cereal to come from the company was Grape-Nuts in 1897... Read on and see all cereals from Post

Marshmallow Pebbles Cereal has been reviewed on MrBreakfast.com.

Click here to read the review.
This cereal belongs to the following Mr Breakfast Cereal Families:
Upload an image for this cereal
Comments About This Cereal
What do you think of Marshmallow Pebbles?

Wow, I didn't realize this cereal was released in 2010. I tried it for the first time at my local Shop-Rite just 3 months ago and it was awesome. Probably way more sugar than I should be eating at my age, but this had to be the best cereal I've had in years. Surprised no one on here can find it at their local stores. I think my ShopRite still has boxes available, unless they recently pulled it from the shelves.

I love this cereal. I've searched online and in stores, unfortunately I can not find anymore.

We love it, but for some reason I can't find it anywhere. Does anyone know why it is no longer available? Thank you. My daughters love it a lot.

My grandchildren love this cereal but I can't seem to find it in any of the stores anymore! Haven't been able to find Marshmallow Pebbles anywhere!

I bought a box of Marshmallow Pebbles and it was totally delicious. Now I've got three flavors of Post Pebbles to enjoy: Fruity, Cocoa, and Marshmallow.