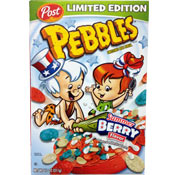 
This limited edition cereal appeared in stores shortly before the 4th of July in 2014. It's described on the box simply as "sweetened rice cereal." There's a distinct patriotic theme to the cereal. The cereal pieces are red, white and blue. The Flintstones characters on the front of the box are wearing red, white and blue: Bamm-Bamm sports a patriotic Uncle Sam hat and Pebbles has a red, white and blue ribbon in her hair. 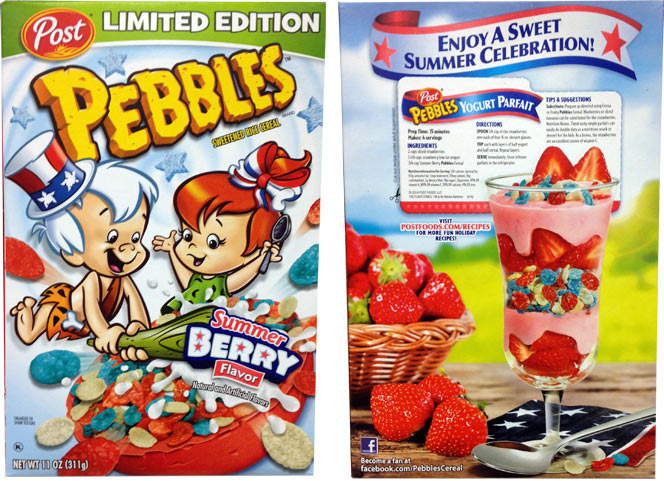 Under the heading "Enjoy A Sweet Summer Celebration!", the back of the box offers a recipe for a Pebbles Yogurt Parfait which follows below:

SPOON 1/4 cup of the strawberries into each of four 8-ounce dessert glasses. TOP each with layers of half yogurt and half cereal. Repeat layers. SERVE immediately. Store leftover parfaits in the refrigerator.

Tips & Suggestions: Prepare as directed using Cocoa of Fruity Pebbles Cereal. Blueberries or sliced bananas can be substituted for the strawberries.

Company Description: Founded by C.W. Post, the company began in 1895 in Battle Creek, Michigan under the name Postum Cereals. Their first product was a coffee substitute called Postum. The first breakfast cereal to come from the company was Grape-Nuts in 1897... Read on and see all cereals from Post
This cereal belongs to the following Mr Breakfast Cereal Families:
Upload an image for this cereal
Comments About This Cereal
What do you think of Summer Berry Pebbles?

Much like HeatBombastic mentioned, I don't remember this cereal having much taste "as is" or in the milk either. Didn't taste bad, but just not much taste to it. Kind of a miss for a new take on the Pebbles cereals.

The cereal itself has a very strong berry with a hint of watermelon and citrus scent. It's kind of unimpressive in milk. Where it truly shines is when mixed with fruit.

Tastes great when mixed with mandarin oranges, fruit cocktail, and even green applesauce! Though mixing it with applesauce gives you a mushy texture that was hardly pebbly.

It taste okay when bananas slices are added with it and the milk. Haven't tried it yet with frozen yogurt like it suggested as a parfait but it sounds promising.

The cereal by itself doesn't make a very tasteful snack.

I even tried it with water. It ended up with a strong scent with a kind of bland taste. Probably because of the water lol

Overall, the smell was actually stronger than the taste, but it packs a huge punch when mixed with sweet, delicious fruit. Can't say it's worth it when it's only milk.