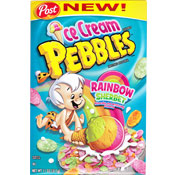 
The complete name of this product is Ice Cream Pebbles Rainbow Sherbet Flavor cereal. The cereal was officially announced on June 2, 2015 with a promise that "the pink, orange and lime green flakes are sure to have cereal and ice cream lovers alike hungry for another scoop."

The front of the box features the Flintstones character Bamm-Bamm Rubble smashing a rainbow sherbet ice cream cone into a bowl of the cereal. It describes the cereal as a "naturally and artificially flavored... sweetened rice cereal."

The back of the introductory box features an activity panel called "Ice Cream Pebbles Fun!" with a find-the-hidden-objects puzzle.

The first 4 ingredients listed on the nutritional panel are rice, sugar, hydrogenated vegetable oil and salt.

In online materials, Post is promoting the cereal as an ingredient for summertime treats like Confetti Ice Cream Squares and Lime Cheesecake With Pebbles Crust. 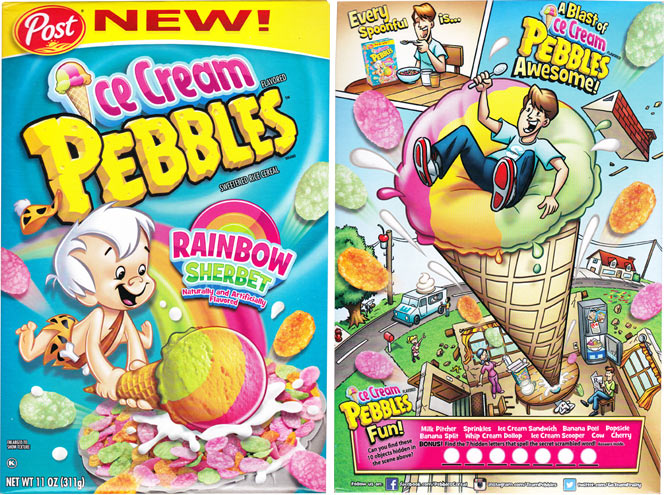 By our count, this is the 22nd Pebbles variety to be introduced since Fruity Pebbles was introduced in 1969.

Ice Cream Pebbles Cereal has been reviewed on MrBreakfast.com.

Click here to read the review.
This cereal belongs to the following Mr Breakfast Cereal Families:
Upload an image for this cereal
Comments About This Cereal
What do you think of Ice Cream Pebbles?

Eh... I'm not really a fan. The smell is amazing, but it smells more flavorful than it tastes.

These were pretty good. My local Target still carries this, but I only liked it enough to try it once. It's kind of hard to top the regular Fruity Pebbles taste, but this cereal is good for a change up. Chances are, if you like the regular Fruity Pebbles, you'll probably like the Sherbert flavored ones. This is probably one of the better recent releases of a new version of an old cereal.

Omg! I just tried these a couple weeks ago and they are are delicious! Fruity Pebbles was always my favorite cereal and I think I might like this one better then the original.