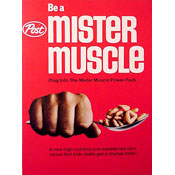 
The box described this triangle-shaped cereal as "a new high nutrition pre-sweetened corn cereal that kids really get a charge from - plug into the Mister Muscle Power Pack".

This product appears to have stalled out in the prototype/testing phase and never made it mass market.

It appears in our database because it's commonly included in other lists of American breakfast cereals.

click to enlarge
Be A Mister Muscle Cereal Box

Submitter: jeffrey
Uploaded: 11/16/2010
Additional details
Upload an image for this cereal
Comments About This Cereal
What do you think of Mister Muscle?
By Gorilla Monsoon

In the UK, there's a brand of drain cleaner called Mr. Muscle... probably not edible though!