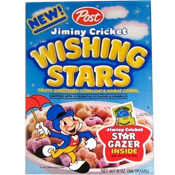 
The complete name of this cereal was Jiminy Cricket Wishing Stars. The front of the box described it as a "fruity sweetened corn, oat & wheat cereal." The back of the box said, "Hope you enjoy new Post Wishing Stars... it's got a delicious fruity taste you'll really like. And don't forget it's important to eat a well-balanced breakfast like the one with new Wishing Stars Cereal." 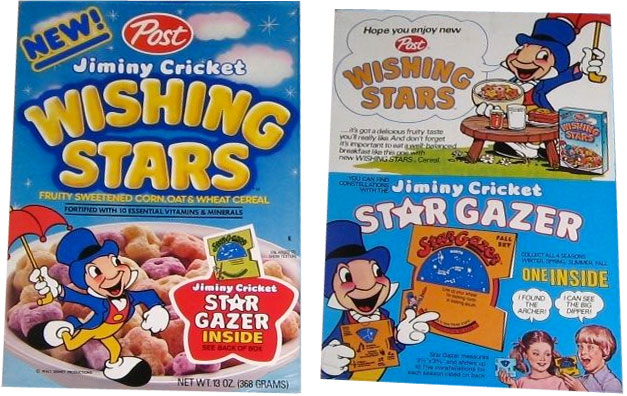 According to the book "Creating Breakthrough Innovations" from Harvard Business School Press, Jiminy Cricket Wishing Stars breakfast cereal was "based around the character Jiminy Cricket, best known for his song 'When You Wish Upon a Star' in the 1940 animated film Pinocchio. Children in the early 1980s had no idea who Jiminy Cricket was and 'all the test results came back negative' (according to David Reibstein, Professor of Marketing, Wharton School)... Needless to say, once launched, Wishing Stars was a failure."

Know premiums: a Yo-yo and a Nightsky "Stargazer".

After costarring in Walt Disney's 1940 film Pinocchio, this talking cricket went on to appear in a number of television specials including The Mickey Mouse Club and Fun and Fancy Free.

Jiminy Cricket's most recent film role was a small cameo in 1988's Who Framed Roger Rabbit.

Upload an image for this cereal
Comments About This Cereal
What do you think of Wishing Stars?

Makes me wonder if they didn't reuse the same star shape later in the decade with Crunchy Stars, since that was also a Post cereal.

Yes - I own a Wishing Stars box. I'm the-Omega-Man on ebay.

Hooray - I finally own an actual box of Wishing Stars - in very nice shape - no problems. I have owned many tough boxes - but this box was far far more difficult to find than I believed it would be. Great box.

I remember buying Wishing Stars when it came out simply because it had the highest sugar content of any cereal in the store. I believe it was 23g of refined, straight-to-the-vein sugar. Also, you could smell the artificial fruit flavor right through the box! It was pretty gnarly stuff, even for a sweet cereal fan. Perfect for a teenage weekend cereal bender.

I have a test box... original from 82. Was just a generic white box. I saved the front glossy pic, and the ingredients from the side. Says consumer "test sample not for sale" on it. Can e-mail pic if interested.

Note From Mr Breakfast: Hi kanelov. Thanks... yeah... I'd be very interested to see that pic. You could email to the address here or if it's a jpg, you could upload it directly on this page. Thanks so much!

Has anybody out there found an actual box of Wishing Stars? I can't even find a picture except for here. Also Mr Breakfast... you should do a Disney Cereals page like you did for Chex and TV cereals. Just a suggestion.