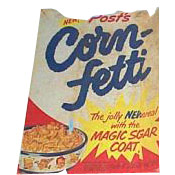 
This cereal was advertised as the "new kind of corn flakes with the magic sugar coat - now guaranteed not to get sticky, even in opened box".

The name of the cereal was later to elongated to Sugar Corn-Fetti. 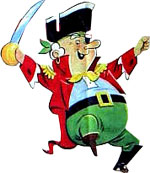 This peg-legged pirate began representing Corn-fetti cereal in late 1951. His catch phrase was "Ho-Ho-Ho! No one can stay away from Corn-fetti. It never gets sticky, even in the box!" Captain Jolly pre-dates breakfast cereals' most famous seaman, Cap'n Crunch, by 12 years. 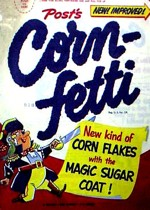 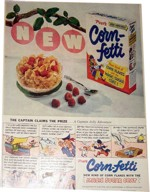 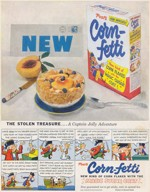 Submitter: leprican_katie
Uploaded: 9/14/2008
Additional details
Upload an image for this cereal
Comments About This Cereal
What do you think of Corn-fetti?

I have always loved sugar and when I was very little Mom gave me all the sugar I wanted. The cereals I liked most were very sweet, Sugar Pops and Cornfetti and Sugar Smacks. I don't think Mom knew how hard and what a choking potential Cornfetti was. I must have had strong teeth, cause I ate a lot of the stuff. To this day, I have a sweet tooth.

I was born in 1947 and remember that cereal as vividly as anything from my youth... and no one else (my age) remembered anything about it. I even had the pirate (forgot the peg leg, but I new it wasn't captain crunch). I see, I am only the 20th to vote for it. At the age of 4 thru 8 or 9 or 10, I rated it as Awesome, but I suspect, "it sucked" was a pretty good review from the adults taste testing the stuff. I no longer eat any cereal with "added" sugar in or on it. Honey tops most of my choices these days.