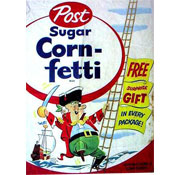 
This cereal was described on the box as "sugar coated corn flakes."

It was originally introduced as Corn-Fetti (sans the word "sugar") in 1951. Under both names, the cereal's mascot was a peg-legged, sword-yielding, smiling pirate name Captain Jolly.

One box announced, "Free surprise gift in every package!" 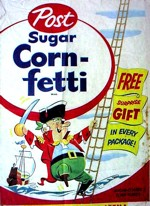 Submitter: jeffrey
Uploaded: 8/15/2010
Additional details
Upload an image for this cereal
Comments About This Cereal
What do you think of Sugar Corn-fetti?

I loved it. I have a terrible sweet tooth and Cornfetti was delicious... very sweet. The only thing that was negative about it was it was very hard to chew, and if it was not chewed thoroughly one could choke, I lucked out.