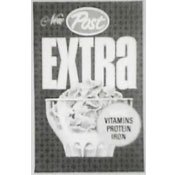 
Post Extra was a crispy wheat flake cereal promoted as "the cereal for kids over 30." It's suspected that this cereal was created to compete with Kellogg's Total cereal which was introduced in 1961. 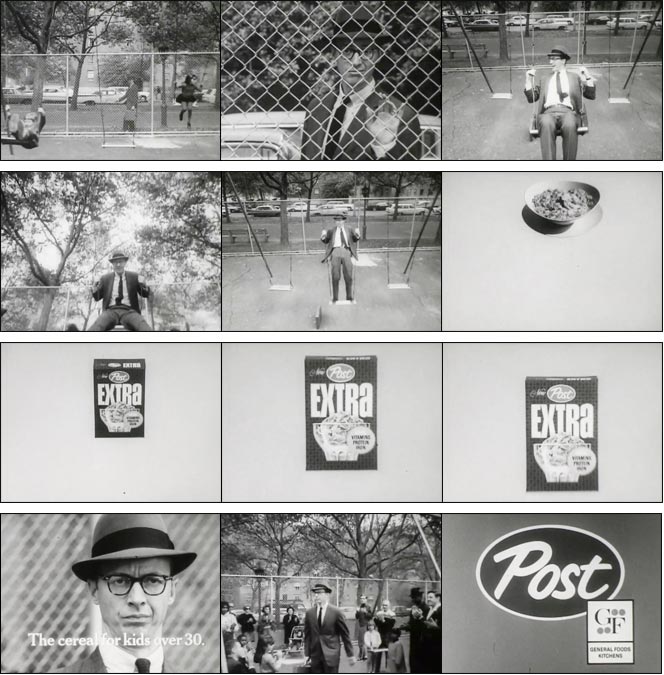 A man in a business suit approaches a playground. He peers through the fence at two children swinging on a swing set. Cut to the man singing on the swing set. As the voice-over narrates, the man's swinging technique gets more advanced... to the point he stands while swinging. Images of the cereal swing toward the screen in alternating cuts.

"Nowadays, kids come in all ages. But what keeps 'em swinging even after they're 30? Extra good nutrition for one thing. Vitamins for pep. Iron for vitality. Plenty of extra protein for get-up-and-go. Now you get them all in new Post Extra... the cereal for kids over 30. Crunchy little crisps of wheat that start you swinging again. New Post Extra is the only crisp wheat cereal in all the world with its combination of vitamins, iron and protein to build you up. New Post Extra... try swinging like a kid again yourself... with new Post Extra... the cereal for kids over 30. Some kids know what's good for 'em. Post cereals make breakfast a little bit better... Post cereals from General Foods."

The business man realizes that a crowd has gathered to watch his antics. He walks away.


Please note: The 1962 date of introduction for this cereal is an educated guess based on the production of a commercial we found and a trend of cereals aimed at adults in the early 1960's. If you have more information about this cereal which could help verify the date, please post a note below.

Now Showing: Early 60's Extra Cereal Ad
Upload an image for this cereal
Comments About This Cereal
What do you think of Extra?
By Lionhearted

Here's your correction: Total is a General Mills product. Although I never heard about Post Extra cereal. It was never in my area.