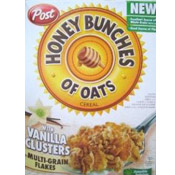 
This cereal later became known as Honey Bunches Of Oats With Vanilla Bunches And Multi-Grain Flakes. Note the switch of the word "clusters" to "bunches". It's been described on the box as "crispy flakes, crunchy oat clusters & a touch of honey!"

Honey Bunches of Oats with Vanilla Clusters Cereal has been reviewed on MrBreakfast.com.

Click here to read the review.
Upload an image for this cereal
Comments About This Cereal
What do you think of Honey Bunches of Oats with Vanilla Clusters?
There are no comments yet for this cereal. Be the first! Was it good? Was it bad?
Do you have information not included in the article? Let the world know!